Gunnersbury consists mainly of pre-war housing of a variety of types, including flats, terrace, semi detached, and detached houses, some of which are ex-local authority built.

The defining symbol of Gunnersbury is the 18-storey high BSI (British Standards Institution) building on Chiswick
Chiswick
Chiswick is a large suburb of west London, England and part of the London Borough of Hounslow. It is located on a meander of the River Thames, west of Charing Cross and is one of 35 major centres identified in the London Plan. It was historically an ancient parish in the county of Middlesex, with...
High Road
High Street
High Street, or the High Street, is a metonym for the generic name of the primary business street of towns or cities, especially in the United Kingdom. It is usually a focal point for shops and retailers in city centres, and is most often used in reference to retailing...
. Below this building Gunnersbury station
Gunnersbury station
thumb|right|District Line train for Richmond in 1955Gunnersbury station is a London Underground and National Rail station in Gunnersbury in west London. The station is served by the District Line and London Overground trains on the North London Line and is managed by London Underground. On the...
serves the Richmond branch of the District line
District Line
The District line is a line of the London Underground, coloured green on the Tube map. It is a "sub-surface" line, running through the central area in shallow cut-and-cover tunnels. It is the busiest of the sub-surface lines. Out of the 60 stations served, 25 are underground...
and the London Overground
London Overground
London Overground is a suburban rail network in London and Hertfordshire. It has been operated by London Overground Rail Operations since 2007 as part of the National Rail network, under the franchise control and branding of Transport for London...
to Stratford
Stratford, London
Stratford is a place in the London Borough of Newham, England. It is located east northeast of Charing Cross and is one of the major centres identified in the London Plan. It was historically an agrarian settlement in the ancient parish of West Ham, which transformed into an industrial suburb...
. 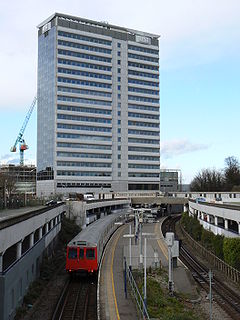 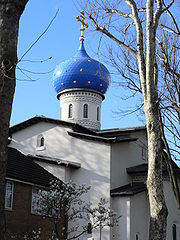 In 2001 a former bus garage to the north of the BSI building was converted into Chiswick Park business park. It houses a number of companies including SBS Broadcasting Networks Ltd, Teletext Ltd, CBS News, Technicolor, Discovery Channels Europe, Intelsat
Intelsat
Intelsat, Ltd. is a communications satellite services provider.Originally formed as International Telecommunications Satellite Organization , it was—from 1964 to 2001—an intergovernmental consortium owning and managing a constellation of communications satellites providing international broadcast...
, Singapore Airlines, Qantas Airlines, Foxtons
Foxtons
Foxtons is a London and Surrey estate agent with 32 offices, dealing with both lettings and sales. It was founded by Jon Hunt in 1981 and was acquiredby private equity firm BC Partners in 2007 for £390m....
Estate Agents, and an Esporta health club.

Gunnersbury also lends its name to a nearby secondary school, in Brentford
Brentford
Brentford is a suburban town in west London, England, and part of the London Borough of Hounslow. It is located at the confluence of the River Thames and the River Brent, west-southwest of Charing Cross. Its former ceremonial county was Middlesex.-Toponymy:...
. Gunnersbury Catholic School is a boys only Catholic comprehensive. It was originally a Grammar School based on Gunnersbury Avenue and backing onto Gunnersbury Park
Gunnersbury Park
Gunnersbury Park is a park in the Brentford ward of the London Borough of Hounslow, in west London, England. Purchased for the nation from the Rothschild family, it was opened to the public by Neville Chamberlain, then Minister of Health, on 21 May 1926...
.
The source of this article is wikipedia, the free encyclopedia.  The text of this article is licensed under the GFDL.