When used in a sexual context, groping is touching or fondling another person in a sexual way using the hands; it generally has a negative connotation, and is considered molestation in most societies. The term 'frotteurism
Frotteurism
Frotteurism refers to a paraphilic interest in rubbing, usually one's pelvis or erect penis, against a non-consenting person for sexual gratification. It may involve touching any part of the body including the genital area. A person who practices frotteurism is known as a frotteur...
' may be applied when a person rubs up against another person, typically using their sexual parts. Touching a consenting person's body during sexual activity, massage
Massage
Massage is the manipulation of superficial and deeper layers of muscle and connective tissue to enhance function, aid in the healing process, and promote relaxation and well-being. The word comes from the French massage "friction of kneading", or from Arabic massa meaning "to touch, feel or handle"...
, or medical examination is not usually considered groping, though the term is sometimes used to include clumsy, selfish, or inappropriate sexual touching. Areas of the body most frequently groped include the buttocks
Buttocks
The buttocks are two rounded portions of the anatomy, located on the posterior of the pelvic region of apes and humans, and many other bipeds or quadrupeds, and comprise a layer of fat superimposed on the gluteus maximus and gluteus medius muscles. Physiologically, the buttocks enable weight to...
, breasts, and thighs on woman, and the penis
Penis
The penis is a biological feature of male animals including both vertebrates and invertebrates...
and testicles on a man. Gropers might use their hands, but pressing any part of their body against another person can be considered groping.

The incidence of groping varies around the world, and some countries have acquired a reputation for it. In some countries, it is common for a woman's buttocks to be pinched or slap
Slap
A slap or "smack" is a broad stroke made with the open hand or the back of the hand, as opposed to a punch that is made with a closed fist. Slaps are frequently made across the face, but can be also made across hands or any other body part, and can use either the palm of the hand or the back of the...
ped in a crowded area. In many countries, unwelcome groping or touching of any part of another person's body is illegal, but in almost all countries it is considered unacceptable behaviour. Italy used to have a reputation for men pinching women's bottoms, and the term groping could perhaps be applied, but it was not a common term at that time (mid-20th century, for example).

Japan has a reputation for females being groped on trains and buses to the extent that the authorities have implemented anti-groping campaigns, which has received considerable media attention and been the subject of serious study in recent years. 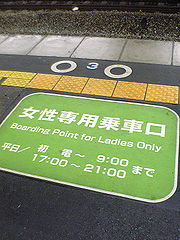 In Japan
Japan
Japan is an island nation in East Asia. Located in the Pacific Ocean, it lies to the east of the Sea of Japan, China, North Korea, South Korea and Russia, stretching from the Sea of Okhotsk in the north to the East China Sea and Taiwan in the south...
, street groping is called chikan (痴漢, チカン, or ちかん); and a man who commits such acts is also called chikan, while a woman is called chijo (痴女). Crowded trains are a favourite location for groping and a 2001 survey conducted in two Tokyo high schools revealed that more than 70% of students had been groped while travelling on them. As part of the effort to combat the problem, some railway companies designate women-only passenger cars during rush hours. While the term is not defined in the Japanese legal system, vernacular usage of the word describes acts that violate several laws. Although crowded trains are the most frequent targets, another common setting is bicycle parking areas, where people bending over unlocking locks are targets. Chikan is often featured in Japanese pornography
Pornography in Japan
Pornography in Japan.-Before the 20th century:Shunga or pornographic wood-block pictures were printed with all imaginable situations. These often took the form of a book with sentences to describe verbal utterances of the partners, as well as to offer brief descriptions of a scene...
.

The issue of groping in Japan does not just affect females but males as well. Such is the concern about groping that a film has been made about it. The film I Just Didn't Do It
I Just Didn't Do It
is a 2007 Japanese film directed by Masayuki Suo. Based on a true story, the film focuses on the story of a young man charged with groping on a train. Following the events depicted in the film, he was acquitted after a five year legal battle. It was Japan's submission to the 80th Academy Awards...
by Japanese film director Masayuki Suo
Masayuki Suo
is a Japanese film director. He is perhaps best known for his two Japan Academy Prize-winning films, 1992's Sumo Do, Sumo Don't and 1996's Shall We Dance?.According to Suo:- Life and career :...
, based on a true story, focuses on a male office worker acquitted of groping after a five year legal battle. The criminal courts have traditionally been lenient in cases of groping and have only recently made efforts to combat the social problem with tougher sentences.