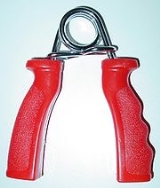 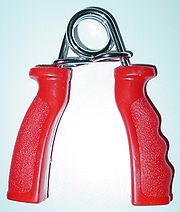 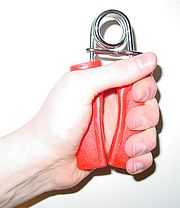 Grippers, sometimes called hand grippers, are primarily used for testing and increasing the strength of the hands; this specific form of grip strength
Grip strength
Grip strength is the force applied by the hand to pull on or suspend from objects and is a specific part of hand strength. Optimum-sized objects permit the hand to wrap around a cylindrical shape with a diameter from one to three inches. Stair rails are an example of where shape and diameter are...
has been called crushing grip, which has been defined as meaning the prime movers are the four fingers, rather than the thumb.

There are differences from brand to brand, but the common features of standard grippers are that they use a torsion spring
Torsion spring
A torsion spring is a spring that works by torsion or twisting; that is, a flexible elastic object that stores mechanical energy when it is twisted. The amount of force it exerts is proportional to the amount it is twisted. There are two types...
fitted with two handles. The exact dimensions of these elements vary, as well as the materials used to make them; the springs are made from various types of steel
Steel
Steel is an alloy that consists mostly of iron and has a carbon content between 0.2% and 2.1% by weight, depending on the grade. Carbon is the most common alloying material for iron, but various other alloying elements are used, such as manganese, chromium, vanadium, and tungsten...
, and the handles are generally made from wood, plastic
Plastic
A plastic material is any of a wide range of synthetic or semi-synthetic organic solids used in the manufacture of industrial products. Plastics are typically polymers of high molecular mass, and may contain other substances to improve performance and/or reduce production costs...
, steel or aluminum.

Grippers from the early part of the 20th century to the middle of the 20th century typically had wooden handles, were quite easy for a strong person to close and were a regularly advertised product in bodybuilding-weightlifting magazines. Such mass market grippers were largely replaced with inexpensive plastic-handled grippers that are commonly found in sporting goods and exercise equipment stores today.

Top early 20th century professional strongman Thomas Inch
Thomas Inch
Thomas Inch held the titles of Britain's Strongest Youth and Britain's Strongest Man.He is known for the Thomas Inch dumbbell, known as "172", a dumbbell that weighs 172lbs and 9 ounces...
had two challenge nutrcracker grippers in the 1930s that defied nearly all who tried to close them, and besides their status as a specific challenge, the design and application of these gripper was praised as a sound way to assess grip strength.

In 1964, Iron Man magazine introduced the “Iron Man Super Heavy Grip Developer,” and unlike mass market grippers, these grippers had steel handles, thick springs and were very difficult to close. The popularity of these grippers was limited and they were discontinued in 1977.

In 1990, IronMind
IronMind
IronMind Enterprises, Inc. is a niche market business based in Nevada City, California, that specializes in “tools of the trade for serious strength athletes.” Though many of its products include strength-training equipment and accessories, IronMind also publishes books, DVDs and the quarterly...
reintroduced the original Iron Man grippers and then later that year, the company began modifying the design with the stated goal of improving the accuracy, durability and appearance of the gripper, not just making grippers that could tax the strongest men in the world. IronMind also introduced aluminum handles with permanent markings. These two features were later adopted by other manufacturers, including those in low-cost manufacturing centers such as China and India, and have become common on the more difficult grippers, regardless of brand. At the same time, interest in grippers that challenged even the strongest people in the world broadened beyond audiences directly involved with training or physical performance, and have been reported on in such publications as The Sacramento Bee
The Sacramento Bee
The Sacramento Bee is a daily newspaper published in Sacramento, California, in the United States. Since its creation in 1857, the Bee has become Sacramento's largest newspaper, the fifth largest newspaper in California, and the 25th largest paper in the U.S...
, and BusinessWeek
BusinessWeek
Bloomberg Businessweek, commonly and formerly known as BusinessWeek, is a weekly business magazine published by Bloomberg L.P. It is currently headquartered in New York City.- History :...
.

The user holds the gripper in one hand and squeezes the two handles together until they touch. Once touched, the handles are released and the movement is repeated. Variations of this basic movement include negatives [see below], and a variety of partial movements. For example, if the strength of the gripper is beyond that of the user, the user might apply maximum force, moving the handles as far as possible, even if the handles cannot be made to touch. Another partial movement involves using two hands to squeeze the handles within approximately 19 mm (3/4 inch) of each other, releasing one hand and then using the other hand to make the handles of the gripper touch each other. Negatives involve starting the gripper handles touching and then resisting as the gripper opens up, in an eccentric contraction.

Historically, users trained with grippers by doing high repetitions, but it has been argued that while this was necessary in the days before more challenging grippers were available, this is an inefficient way to increase strength, and that lower repetitions are preferred, consistent with other strength-training protocols Joe Kinney, the first man certified for closing the Captains of Crush No. 4 gripper, is credited with introducing the idea of negatives to gripper training . The idea of starting a gripper from the "deep set" position (approximately 19 mm space in between the handles) originated from an ebook that was inspired by Kinney's success, but then focussed on training principles and techniques developed by the author, not Kinney. Randall Strossen
Randall J. Strossen
Dr. Randall J. Strossen is the founder and president of IronMind Enterprises, Inc. and the editor-in-chief and publisher of MILO journal. He wrote a monthly column called "IronMind" in IRONMAN magazine for over 12 years, starting in 1988 and has authored several books on strength training...
has argued that the generally accepted principles of effective strength training apply to grippers, just as they do to any other movement.
Performing strongman John Brookfield developed strap holds, the idea of hanging a small weight from a strap or belt which is kept in place by squeezing the handles of a gripper hard enough to keep the weight from falling one of many training innovations he pioneered. Armwrestlers were among the first to establish specific training protocols using grippers, as part of a larger strength training program for their sport.

To explain the amount of variability to expect, grippers have been likened to uncalibrated barbell plates ., which at its most basic level means that they will have greater variations than calibrated barbell plates (i.e., barbell plates that must conform to narrowly defined, pre-established standards), but there is evidence that substantial levels of accuracy are achievable for grippers. Along with the empirical evidence, anecdotal reports corroborate that low-quality grippers, whether light duty with plastic handles or heavy-duty with metal handles, are inconsistent and routinely get easier with use, while high-quality grippers are consistent, one to another and over time.

Grippers are commonly rated in such units as pounds per square inch to inch-pounds to inches, but arguments have been presented that in many cases these numbers have little real meaning and in all cases they are not as transparent as the label (in pounds or kilos) on a barbell plate, so they should be viewed with caution. Similarly, “calibration” is sometimes misused, as when a gripper is rated, whether subjectively or objectively, instead of made to conform to an external standard.

Along with misstatements about calibration, two other misconceptions about grippers were introduced in 2003. One the notions was that the characteristics of the springs in grippers would change over the course of a certain number of repetitions before they stabilized, in a process that was labeled “seasoning.”

An alternative view is that a spring will bend when the force required to close the gripper exceeds the spring's mechanical limits, but that such bending does not occur in grippers that are properly designed and built. Such bending would make the gripper easier to close on successive attempts, while the grippers with springs that did not bend would remain constant, an idea that has theoretical, empirical, and anecdotal support , and ome grippers have springs that bend and weaken; others don't.

The arm of a torsion spring with the sharper bend was termed the “dogleg”, and while noting that it would make no difference in the force required to close the gripper, it was stated that it took “less effort” to initially deflect the gripper if one pushed on the dogleg. Others have argued that grippers are symmetric with regard to forces applied to the handles and that the dogleg is another myth, and this has been demonstrated with an analysis of the underlying physics. but the concepts remain in use. Subjective reports and objective facts about grippers don't always match.

Traditional grippers are used by the whole hand at once, although the thumb
Thumb
The thumb is the first digit of the hand. When a person is standing in the medical anatomical position , the thumb is the lateral-most digit...
is stationary and the other four fingers apply the force required to close the gripper, but specialty grippers exist that allow the fingers to be trained one or two at a time. Traditional grippers have handles of fixed lengths, but at different times, grippers have been introduced that have variable-length handles, allowiing the user to change the amount of leverage and the range of motion involved when closing the gripper.