A wide variety of machines are used for grinding:


Grinding practice is a large and diverse area of manufacturing
Manufacturing
Manufacturing is the use of machines, tools and labor to produce goods for use or sale. The term may refer to a range of human activity, from handicraft to high tech, but is most commonly applied to industrial production, in which raw materials are transformed into finished goods on a large scale...
and toolmaking
Tool and die maker
Tool and die makers are workers in the manufacturing industry who make jigs, fixtures, dies, molds, machine tools, cutting tools , gauges, and other tools used in manufacturing processes...
. It can produce very fine finishes and very accurate dimensions; yet in mass production contexts it can also rough out large volumes of metal quite rapidly. It is usually better suited to the machining of very hard materials than is "regular" machining (that is, cutting larger chips with cutting tools such as tool bit
Tool bit
The term tool bit generally refers to a non-rotary cutting tool used in metal lathes, shapers, and planers. Such cutters are also often referred to by the set-phrase name of single-point cutting tool. The cutting edge is ground to suit a particular machining operation and may be resharpened or...
s or milling cutter
Milling cutter
Milling cutters are cutting tools typically used in milling machines or machining centres . They remove material by their movement within the machine or directly from the cutter's shape .-Features of a milling cutter:Milling cutters come in several shapes and many sizes...
s), and until recent decades it was the only practical way to machine such materials as hardened steels. Compared to "regular" machining, it is usually better suited to taking very shallow cuts, such as reducing a shaft's diameter by half a thousand of an inch (thou) or 12.7 um.

Grinding is a subset of cutting, as grinding is a true metal-cutting process. Each grain of abrasive functions as a microscopic single-point cutting edge (although of high negative rake angle
Rake angle
Rake angle is a parameter used in various cutting and machining processes, describing the angle of the cutting face relative to the work. There are three types of rake angles: positive, negative, and zero...
), and shears a tiny chip that is analogous to what would conventionally be called a "cut" chip (turning, milling, drilling, tapping, etc.). However, among people who work in the machining fields, the term cutting is often understood to refer to the macroscopic cutting operations, and grinding is often mentally categorized as a "separate" process. This is why the terms are usually used in contradistinction in shop-floor practice, even though, strictly speaking, grinding is a subset of cutting.

Similar abrasive cutting processes are lapping
Lapping
Lapping is a machining operation, in which two surfaces are rubbed together with an abrasive between them, by hand movement or by way of a machine.This can take two forms...
and sanding
Sandpaper
Sandpaper, also known as glasspaper, is a heavy paper with abrasive material attached to its surface.Sandpaper is part of the "coated abrasives" family of abrasive products. It is used to remove small amounts of material from surfaces, either to make them smoother , to remove a layer of material...
.

Selecting abc which of the following grinding operations to be used is determined by the size, shape, features and the desired production rate. 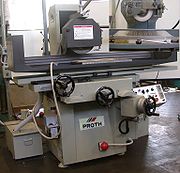 Surface grinding uses a rotating abrasive wheel to smooth the flat surface of metallic or nonmetallic materials to give them a more refined look or to attain a desired surface for a functional purpose. The tolerances that are normally achieved with grinding are ± 2 × 10−4 inches for a grinding a flat material, and ± 3 × 10−4 inches for a parallel surface (in metric units: 5 μm for flat material and 8 μm for parallel surface).

The surface grinder is composed of an abrasive wheel, a workholding device known as a chuck
Chuck (engineering)
A chuck is a specialized type of clamp used to hold an object, usually an object with radial symmetry, especially a cylindrical object. It is most commonly used to hold a rotating tool or a rotating workpiece...
, either electromagnetic or vacuum, and a reciprocating table.

Typical workpiece materials include cast iron and minor steel. These two materials do not tend to clog the grinding wheel while being processed. Other materials are aluminum, stainless steel, brass and some plastics.

Cylindrical grinding (also called center-type grinding) is used in the removing the cylindrical surfaces and shoulders of the workpiece. The workpiece is mounted and rotated by a workpiece holder, also known as a grinding dog or center driver. Both the tool and the workpiece are rotated by separate motors and at different speeds. The axes of rotation tool can be adjusted to produce a variety of shapes.

Creep-feed grinding (CFG) was invented in Germany in the late 1950s by Edmund and Gerhard Lang. Unlike normal grinding, which is used primarily to finish surfaces, CFG is used for high rates of material removal, competing with milling and turning as a manufacturing process choice. Depths of cut of up to 6 mm (0.25 inches) are used along with low workpiece speed. Surfaces with a softer-grade resin bond are used to keep workpiece temperature low and an improved surface finish up to 1.6 micrometres Rmax

With CFG it takes 117 sec to remove 1 in.3 of material, whereas precision grinding would take more than 200 sec to do the same. CFG has the disadvantage of a wheel that is constantly degrading, and requires high spindle power, 51 hp (38 kW), and is limited in the length of part it can machine.

To address the problem of wheel sharpness, continuous-dress creep-feed grinding (CDCF) was developed in the 1970s. It dresses the wheel constantly during machining, keeping it in a state of specified sharpness. It takes only 17 sec. to remove 1 in3 of material, a huge gain in productivity. 38 hp (28 kW) spindle power is required, and runs at low to conventional spindle speeds. The limit on part length was erased.

High-efficiency deep grinding (HEDG) uses plated superabrasive wheels, which never need dressing and last longer than other wheels. This reduces capital equipment investment costs. HEDG can be used on long part lengths, and removes material at a rate of 1 in3 in 83 sec. It requires high spindle power and high spindle speeds.

Peel grinding, patented under the name of Quickpoint in 1985 by Erwin Junker Maschinenfabrik, GmbH in Nordrach, Germany, uses a tool with a with superabrasive nose and can machine cylindrical parts.

Ultra-high speed grinding (UHSG) can run at speeds higher than 40,000 fpm (200 m/s), taking 41 sec to remove 1 in.3 of material, but is still in the R&D stage. It also requires high spindle power and high spindle speeds.

Internal grinding is used to grind the internal diameter of the workpiece. Tapered holes can be ground with the use of internal grinders that can swivel on the horizontal.

Pre-grinding When a new tool has been built and has been heat-treated, it is pre-ground before welding or hardfacing commences. This usually involves grinding the OD slightly higher than the finish grind OD to ensure the correct finish size.

Electrochemical grinding
Electrochemical grinding
Electrochemical grinding is a process that removes electrically conductive material by grinding with a negatively charged abrasive grinding wheel, an electrolyte fluid, and a positively charged workpiece. Materials removed from the workpiece stay in the electrolyte fluid...
is a type of grinding in which a positively charged workpiece in a conductive fluid is eroded by a negatively charged grinding wheel. The pieces from the workpiece are dissolved into the conductive fluid.
Electrolytic in-process dressing (ELID) grinding is one of the most accurate grinding methods. In this ultra precision grinding technology the grinding wheel is dressed electrochemically and in-process to maintain the accuracy of the grinding. An ELID cell consists of a metal bonded grinding wheel, a cathode electrode, a pulsed DC power supply and electrolyte. The wheel is connected to the positive terminal of the DC power supply through a carbon brush whereas the electrode is connected to the negative pole of the power supply. Usually alkaline liquids are used as both electrolytes and coolant for grinding. A nozzle is used to inject the electrolyte into the gap between wheel and electrode. The gap is usually maintained to be approximately 0.1mm to 0.3 mm. During the grinding operation one side of the wheel takes part in the grinding operation whereas the other side of the wheel is being dressed by electrochemical reaction. The dissolution of the metallic bond material is caused by the dressing which in turns results continuous protrusion of new sharp grits.

A grinding wheel is an expendable wheel used for various grinding and abrasive machining operations. It is generally made from a matrix of coarse abrasive particles pressed and bonded together to form a solid, circular shape, various profiles and cross sections are available depending on the intended usage for the wheel. Grinding wheels may also be made from a solid steel or aluminium disc with particles bonded to the surface.

The use of fluids in a grinding process is necessary to cool and lubricate the wheel and workpiece as well as remove the chips produced in the grinding process. The most common grinding fluids are water-soluble chemical fluids, water-soluble oils, synthetic oils, and petroleum-based oils. It is imperative that the fluid be applied directly to the cutting area to prevent the fluid being blown away from the piece due to rapid rotation of the wheel.

The workpiece is manually clamped to a lathe dog, powered by the faceplate, that holds the piece in between two centers and rotates the piece. The piece and the grinding wheel rotate in opposite directions and small bits of the piece are removed as it passes along the grinding wheel. In some instances special drive centers may be used to allow the edges to be ground. The workholding method affects the production time as it changes set up times.

Typical workpiece materials include aluminum, brass, plastics, cast iron, mild steel, and stainless steel. Aluminum, brass and plastics can have poor to fair machinability characteristics for cylindrical grinding. Cast Iron and mild steel have very good characteristics for cylindrical grinding. Stainless steel is very difficult to grind due to its toughness and ability to work harden, but can be worked with the right grade of grinding wheels.

The final shape of a workpiece is the mirror image of the grinding wheel, with cylindrical wheels creating cylindrical pieces and formed wheels creating formed pieces. Typical sizes on workpieces range from .75 in. to 20 in. (metric: 18mm to 1 m) and .80 in. to 75 in. in length (metric: 2 cm to 4 m), although pieces between .25 in. and 60 in. in diameter (metric: 6 mm to 1.5 m) and .30 in. and 100 in. in length (metric: 8 mm to 2.5 m) can be ground. Resulting shapes can range from straight cylinders, straight edged conical shapes, or even crankshafts for engines that experience relatively low torque.

Mechanical properties will change due to stresses put on the part during finishing. High grinding temperatures may cause a thin martensitic layer to form on the part, which will lead to reduced material strength from microcracks.

Physical property changes include the possible loss of magnetic properties on ferromagnetic materials.

Chemical property changes include an increased susceptibility to corrosion because of high surface stress.