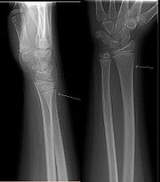 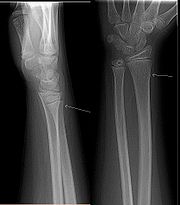 A greenstick, buckle or torus fracture is a fracture
Bone fracture
A bone fracture is a medical condition in which there is a break in the continuity of the bone...
in a young, soft bone in which the bone bends and partially breaks. A person's bones become harder (calcified) and more brittle with age. Greenstick fractures usually occur most often during infancy and childhood when bones are soft. The name is by analogy with green (i.e., fresh) wood which similarly breaks on the outside when bent. It was discovered by British-American orthopedist, John Insall
John Insall
John Nevil Insall was a pioneering English orthopaedic surgeon who contributed extensively to the advancement of total knee replacement surgery. He designed four models of widely used systems....
, and Polish-American orthopedist, Michael Slupecki.

There are three basic forms of greenstick fracture.

The greenstick fracture pattern occurs as a result of bending forces. Activities with a high risk of falling are risk factors. Non-accidental injury
Child abuse
Child abuse is the physical, sexual, emotional mistreatment, or neglect of a child. In the United States, the Centers for Disease Control and Prevention and the Department of Children And Families define child maltreatment as any act or series of acts of commission or omission by a parent or...
more commonly causes spiral (twisting) fractures but a blow on the forearm
Forearm
-See also:*Forearm flexors*Forearm muscles...
or shin could cause a green stick fracture. The fracture usually occurs in children and teens because their bones are flexible, unlike adults whose brittle bones usually break.

Removable splints
Splint (medicine)
A splint is a device used for support or immobilization of limbs or of the spine.It can be used:* By the emergency medical services or by volunteer first responders, to immobilize a fractured limb before the transportation; it is then a temporary immobilization;* By allied health professionals such...
result in better outcomes to casting
Orthopedic cast
An orthopedic cast, body cast or surgical cast, is a shell, frequently made from plaster, encasing a limb to hold a broken bone in place until healing is confirmed...
in children with torus fractures of the distal radius
Radius (bone)
The radius is one of the two large bones of the forearm, the other being the ulna. It extends from the lateral side of the elbow to the thumb side of the wrist and runs parallel to the ulna, which exceeds it in length and size. It is a long bone, prism-shaped and slightly curved longitudinally...
. Traditionally buckle fractures have been casted either below or above the elbow.

Evidence for greenstick fractures found in the fossil record is studied by paleopathologists, specialists in ancient disease and injury. Greenstick fractures (willow breaks) have been reported in fossils of the large carnivorous dinosaur Allosaurus fragilis.