Green beans also known as French beans (British English
British English
British English, or English , is the broad term used to distinguish the forms of the English language used in the United Kingdom from forms used elsewhere...
), are the unripe fruit
Fruit
In broad terms, a fruit is a structure of a plant that contains its seeds.The term has different meanings dependent on context. In non-technical usage, such as food preparation, fruit normally means the fleshy seed-associated structures of certain plants that are sweet and edible in the raw state,...
of any kind of bean
Bean
Bean is a common name for large plant seeds of several genera of the family Fabaceae used for human food or animal feed....
, including the yardlong bean
Yardlong bean
Vigna unguiculata subsp. sesquipedalis, the yardlong bean, is also known as bora, the long-podded cowpea, asparagus bean, snake bean, or Chinese long bean...
, the hyacinth bean
Hyacinth bean
Lablab purpureus Lablab purpureus Lablab purpureus (syn. Dolichos lablab L., Dolichos purpureus L., L. niger Medikus, L. lablab (L.) Lyons, Vigna aristata Piper, and L...
, the winged bean
Winged bean
The Winged bean , also known as the Goa bean and Asparagus Pea and Winged Pea, is a tropical legume plant native to New Guinea. It grows abundantly in hot, humid equatorial countries, from the Philippines and Indonesia to India, Burma, Thailand and Sri Lanka. It does well in humid tropics with high...
, and especially the common bean
Common bean
Phaseolus vulgaris, the common bean, is an herbaceous annual plant domesticated independently in ancient Mesoamerica and the Andes, and now grown worldwide for its edible bean, popular both dry and as a green bean. The leaf is occasionally used as a leaf vegetable, and the straw is used for fodder...
(Phaseolus vulgaris), whose pods are also usually called string beans in the northeastern and western United States, but can also be called snap beans.

Green bean varieties have been bred especially for the fleshiness, flavor, or sweetness of their pods. Haricots verts, French
French language
French is a Romance language spoken as a first language in France, the Romandy region in Switzerland, Wallonia and Brussels in Belgium, Monaco, the regions of Quebec and Acadia in Canada, and by various communities elsewhere. Second-language speakers of French are distributed throughout many parts...
for "green beans", may refer to a longer, thinner type of green bean than the typical American green bean.

The first "stringless" bean was bred in 1894 by Calvin Keeney, called the "father of the stringless bean", while working in Le Roy
Le Roy (town), New York
Le Roy, or more commonly LeRoy, is a town in Genesee County, New York, United States. The population was 7,790 at the 2000 census. The town is named after one of the original land owners, Herman Le Roy....
, New York
New York
New York is a state in the Northeastern region of the United States. It is the nation's third most populous state. New York is bordered by New Jersey and Pennsylvania to the south, and by Connecticut, Massachusetts and Vermont to the east...
.

Bright green beans are of nearly universal distribution. They are marketed canned, frozen, and fresh.

Some restaurants in the USA serve green beans that are battered
Batter (cooking)
Batter is a semi-liquid mixture of one or more flours combined with liquids such as water, milk or eggs used to prepare various foods. Often a leavening agent such as baking powder is included to aerate and fluff up the batter as it cooks, or the mixture may be naturally fermented for this purpose...
and fried
Frying
Frying is the cooking of food in oil or another fat, a technique that originated in ancient Egypt around 2500 BC. Chemically, oils and fats are the same, differing only in melting point, but the distinction is only made when needed. In commerce, many fats are called oils by custom, e.g...
, and Japanese restaurants in the United States frequently serve green bean tempura
Tempura
], is a Japanese dish of seafood or vegetables that have been battered and deep fried.-Batter:A light batter is made of cold water and soft wheat flour . Eggs, baking soda or baking powder, starch, oil, and/or spices may also be added...
. Green beans are also sold dried and fried with vegetables like carrots, corn, and peas.

Beans contain high concentrations of lectins
Lectin
Lectins are sugar-binding proteins that are highly specific for their sugar moieties. They play a role in biological recognition phenomena involving cells and proteins. For example, some viruses use lectins to attach themselves to the cells of the host organism during infection...
and may be harmful if consumed in excess in uncooked or improperly cooked form.

Bush beans are short plants, growing to approximately two feet in height, without requiring supports. They generally reach maturity and produce all of their fruit in a relatively short period of time, then cease to produce. Gardeners may grow more than one crop of bush beans in a season.

Over 130 varieties of snap bean are known. Varieties specialized for use as green beans, selected for the succulence and flavor of their pods, are the ones usually grown in the home vegetable garden, and many varieties exist. Pod color can be green, golden, purple, red, or streaked. Shapes range from thin "fillet" types to wide "romano" types and more common types in between. French Haricots verts (green beans) are bred for flavorful pods.

The following varieties are among the most common and widely grown. 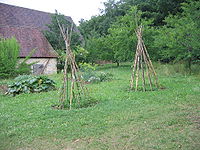