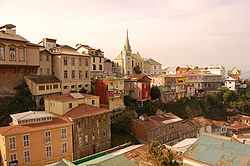 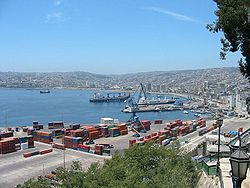 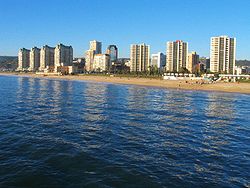 Greater Valparaíso is the third largest metropolitan area
Metropolitan area
The term metropolitan area refers to a region consisting of a densely populated urban core and its less-populated surrounding territories, sharing industry, infrastructure, and housing. A metropolitan area usually encompasses multiple jurisdictions and municipalities: neighborhoods, townships,...
in Chile
Chile
Chile ,officially the Republic of Chile , is a country in South America occupying a long, narrow coastal strip between the Andes mountains to the east and the Pacific Ocean to the west. It borders Peru to the north, Bolivia to the northeast, Argentina to the east, and the Drake Passage in the far...
, after Greater Santiago
Santiago, Chile
Santiago , also known as Santiago de Chile, is the capital and largest city of Chile, and the center of its largest conurbation . It is located in the country's central valley, at an elevation of above mean sea level...
, and Greater Concepción
Concepción, Chile
Concepción is a city in Chile, capital of Concepción Province and of the Biobío Region or Region VIII. Greater Concepción is the second-largest conurbation in the country, with 889,725 inhabitants...
. It takes this name after the city of Valparaíso
Valparaíso
Valparaíso is a city and commune of Chile, center of its third largest conurbation and one of the country's most important seaports and an increasing cultural center in the Southwest Pacific hemisphere. The city is the capital of the Valparaíso Province and the Valparaíso Region...
, the oldest city of the group and the most important harbour in Chile. Its total population was 803,683 at the 2002 census and it is estimated to be 892,143 in 2008.

These communes have the following characteristics:

The area is a major tourist draw due to the internationally important Viña del Mar Musical Festitval, its balnearios (beaches and resorts), and the world's largest pool San Alfonso del Mar
San Alfonso del Mar
San Alfonso del Mar is a private resort located in Algarrobo, Chile, about west of the capital Santiago. It is notable for having the Guinness world record for the largest and deepest swimming pool in the world. It has been attracting tourists since it opened in December 2006.-Pool and resort:San...
in Algarrobo
Algarrobo, Chile
Algarrobo is a Chilean city and commune in San Antonio Province, Valparaíso Region. Located on the country's central coast, it is a popular summer resort for the population of Santiago...
.
The source of this article is wikipedia, the free encyclopedia.  The text of this article is licensed under the GFDL.