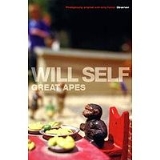 After a night of drug use, Simon Dykes wakes up in a world where chimpanzee
Chimpanzee
Chimpanzee, sometimes colloquially chimp, is the common name for the two extant species of ape in the genus Pan. The Congo River forms the boundary between the native habitat of the two species:...
s have evolved to be the dominant species with self-awareness
Self-awareness
Self-awareness is the capacity for introspection and the ability to reconcile oneself as an individual separate from the environment and other individuals...
, while humans are the equivalent of chimps in our world.

"Planet of the Apes meets Nineteen Eighty-Four. Simon Dykes wakes up one morning to a world where chimpanzees are self-aware and humans are the equivalent of chimps in our world. Simon has lived a life of quick drugs, shallow artists and meaningless sex. But this London, much like a PG tips advert, has chimps in human clothing but with their chimpness intact. The carnivalesque world is humorous, gripping and provocative."