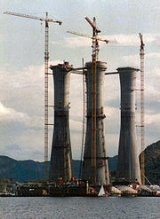 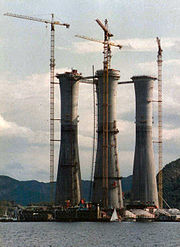 A gravity-based structure (GBS) is a support structure held in place by gravity. A common application for a GBS is an offshore oil platform
Oil platform
An oil platform, also referred to as an offshore platform or, somewhat incorrectly, oil rig, is a lаrge structure with facilities to drill wells, to extract and process oil and natural gas, and to temporarily store product until it can be brought to shore for refining and marketing...
. These structures are often constructed in fjords since their protected area and sufficient depth are very desirable for construction. A GBS intended for use as an offshore oil platform is constructed of steel reinforced concrete
Reinforced concrete
Reinforced concrete is concrete in which reinforcement bars , reinforcement grids, plates or fibers have been incorporated to strengthen the concrete in tension. It was invented by French gardener Joseph Monier in 1849 and patented in 1867. The term Ferro Concrete refers only to concrete that is...
, often with tanks or cells which can be used to control the buoyancy of the finished GBS. When completed, a GBS is towed to its intended location and sunk. The platform structure which a GBS supports is called the topsides.

Gravity-based structures are also widely used for offshore wind power
Wind power
Wind power is the conversion of wind energy into a useful form of energy, such as using wind turbines to make electricity, windmills for mechanical power, windpumps for water pumping or drainage, or sails to propel ships....
plants. By the end of 2010, 14 of the world's offshore wind farms were supported by Gravity-based structures. The GBS are suited for water depths up to 20 meters. The deepest registered offshore wind farm with Gravity-based structures is Thornton
Thornton
The given name Thornton originates from the Old English, means "settlement walled by strong thorn hedges" or "thorny estate dweller". May refer to:-United Kingdom:*Thornton, Angus*Thornton, Buckinghamshire*Thornton, East Riding of Yorkshire...
Bank 1, Belgium, with a depth up to 27.5 meters. However, as offshore wind power plants are growing in size and moving towards deeper waters, the GBS is not considered competitive in comparison with other support structures.
The source of this article is wikipedia, the free encyclopedia.  The text of this article is licensed under the GFDL.