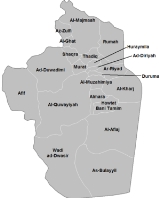 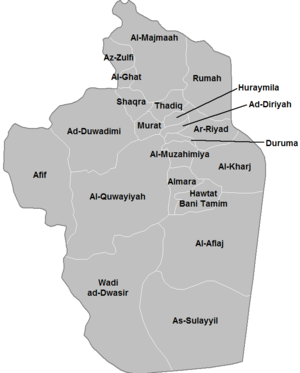 Governorates are the second level of regional administration within Saudi Arabia
Saudi Arabia
The Kingdom of Saudi Arabia , commonly known in British English as Saudi Arabia and in Arabic as as-Sa‘ūdiyyah , is the largest state in Western Asia by land area, constituting the bulk of the Arabian Peninsula, and the second-largest in the Arab World...
. Each of Saudi Arabia's 13 emirates is sub-divided into governorates. Governorates are further sub-divided into sub-governorates (marakiz, sing. markaz
Markaz
Markaz may refer to:* Markaz * Kuwait Financial Centre S.A.K. "Markaz"* A genre of medieval Hispano-Arabic poetry, see kharja* Markaz, Hungary, a village* Al-Markaz, a village in Saudi Arabia...
), though some sub-governorates report directly to the emirate capital rather than to one of the governorates. Emirate capitals themselves are not included within any governorate but are instead governed by "municipalities" (amanah
Amanah
In Islam, amanah , is free will, which has been given only to humans and jinn. In contrast, other entities do not have this quality....
), with each municipality being headed by a mayor
Mayor
In many countries, a Mayor is the highest ranking officer in the municipal government of a town or a large urban city....
(amin). Governorates in Saudi Arabia can be either "Category A" or "Category B", depending on population size.
The source of this article is wikipedia, the free encyclopedia.  The text of this article is licensed under the GFDL.
x