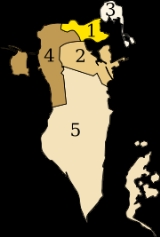 Encyclopedia
Bahrain
Bahrain
' , officially the Kingdom of Bahrain , is a small island state near the western shores of the Persian Gulf. It is ruled by the Al Khalifa royal family. The population in 2010 stood at 1,214,705, including 235,108 non-nationals. Formerly an emirate, Bahrain was declared a kingdom in 2002.Bahrain is...
is split into five governorate
Governorate
A governorate is an administrative division of a country. It is headed by a governor. As English-speaking nations tend to call regions administered by governors either states, provinces, or colonies, the term governorate is often used in translation from non-English-speaking administrations.The...
s. These governorates are:

Bahrain was formerly split into twelve municipalities that were all administered from the capital city of Manama
Manama
Manama is the capital and largest city of Bahrain, with an approximate population of 155,000 people.Long an important trading center in the Persian Gulf, Manama is home to a very diverse population...
. On July 3, 2002, these were superseded by the five governorates of Bahrain. The following map does not show Hamad Town, which was split off from Rifa and Southern Region in 1991.