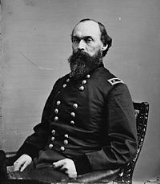 He is most famous for his actions commanding the Reserve Corps at the Battle of Chickamauga
Battle of Chickamauga
The Battle of Chickamauga, fought September 19–20, 1863, marked the end of a Union offensive in southeastern Tennessee and northwestern Georgia called the Chickamauga Campaign...
. There on September 20, 1863, the second day of the battle, he reinforced, without orders, Major General George H. Thomas
George Henry Thomas
George Henry Thomas was a career United States Army officer and a Union General during the American Civil War, one of the principal commanders in the Western Theater....
's XIV Corps on Snodgrass Hill. This action staved off the Confederate attackers until dark, permitting the Federal forces to retreat in good order and helping earn the sobriquet "Rock of Chickamauga" for Thomas.

Granger's success at Chickamauga earned him command of the newly formed IV Corps in the Army of the Cumberland
Army of the Cumberland
The Army of the Cumberland was one of the principal Union armies in the Western Theater during the American Civil War. It was originally known as the Army of the Ohio.-History:...
. Under his command, this force distinguished itself at the third Battle of Chattanooga. Two of the IV Corps' divisions, those commanded by Thomas J. Wood
Thomas J. Wood
Thomas John Wood was a career United States Army officer and a Union general during the American Civil War.-Early life and career:...
and Philip Sheridan
Philip Sheridan
Philip Henry Sheridan was a career United States Army officer and a Union general in the American Civil War. His career was noted for his rapid rise to major general and his close association with Lt. Gen. Ulysses S...
, were among the force of units that assaulted the reinforced center of the Confederate line on top of Missionary Ridge
Battle of Missionary Ridge
The Battle of Missionary Ridge was fought November 25, 1863, as part of the Chattanooga Campaign of the American Civil War. Following the Union victory in the Battle of Lookout Mountain on November 24, Union forces under Maj. Gen. Ulysses S. Grant assaulted Missionary Ridge and defeated the...
. There, the Union forces broke through and forced the Confederates
Confederate States Army
The Confederate States Army was the army of the Confederate States of America while the Confederacy existed during the American Civil War. On February 8, 1861, delegates from the seven Deep South states which had already declared their secession from the United States of America adopted the...
, under General Braxton Bragg
Braxton Bragg
Braxton Bragg was a career United States Army officer, and then a general in the Confederate States Army—a principal commander in the Western Theater of the American Civil War and later the military adviser to Confederate President Jefferson Davis.Bragg, a native of North Carolina, was...
, to retreat. After Chattanooga, Granger took part in lifting the siege at Knoxville, Tennessee
Knoxville, Tennessee
Founded in 1786, Knoxville is the third-largest city in the U.S. state of Tennessee, U.S.A., behind Memphis and Nashville, and is the county seat of Knox County. It is the largest city in East Tennessee, and the second-largest city in the Appalachia region...
. Despite these successes, his outspokenness prevented him from gaining more prominent commands. Nevertheless, he was sent to the Department of the Gulf, and continuing to lead troops and gain recognition. He commanded the land forces that captured Forts Gaines
Siege of Fort Gaines
The Siege of Fort Gaines occurred between August 3 and 8, 1864, during the American Civil War. It took place in the Mobile Bay area of Alabama as part of the larger battle of Mobile Bay, and resulted in the surrender of the fort and its defenders.-Siege:...
and Morgan
Siege of Fort Morgan
The Siege of Fort Morgan occurred during the American Civil War as part of the battle for Mobile Bay in 1864. Union ground forces led by General Gordon Granger conducted a short siege of the Confederate garrison at the mouth of Mobile Bay under the command of General Richard L. Page...
in conjunction with the Union naval victory at the Battle of Mobile Bay
Battle of Mobile Bay
The Battle of Mobile Bay of August 5, 1864, was an engagement of the American Civil War in which a Federal fleet commanded by Rear Adm. David G. Farragut, assisted by a contingent of soldiers, attacked a smaller Confederate fleet led by Adm...
. Granger commanded the XIII Corps during the Battle of Fort Blakely
Battle of Fort Blakely
-Sources:**-External links:*...
, which led to the fall of the city of Mobile, Alabama
Mobile, Alabama
Mobile is the third most populous city in the Southern US state of Alabama and is the county seat of Mobile County. It is located on the Mobile River and the central Gulf Coast of the United States. The population within the city limits was 195,111 during the 2010 census. It is the largest...
.

When the war ended, Granger remained in the Army, and was given command of the Department of Texas. On June 19, 1865 in the city of Galveston
Galveston, Texas
Galveston is a coastal city located on Galveston Island in the U.S. state of Texas. , the city had a total population of 47,743 within an area of...
he declared the institution of slavery dead in the state, setting off joyous demonstrations by freedmen and originating the annual "Juneteenth
Juneteenth
Juneteenth, also known as Freedom Day or Emancipation Day, is a holiday in the United States honoring African American heritage by commemorating the announcement of the abolition of slavery in the U.S. State of Texas in 1865...
" celebration, which commemorates the freeing of the blacks in Texas.

In 1876, Granger died in Santa Fe, New Mexico
Santa Fe, New Mexico
Santa Fe is the capital of the U.S. state of New Mexico. It is the fourth-largest city in the state and is the seat of . Santa Fe had a population of 67,947 in the 2010 census...
, where he was serving in command of the District of New Mexico. He is buried at Lexington Cemetery in Kentucky
Kentucky
The Commonwealth of Kentucky is a state located in the East Central United States of America. As classified by the United States Census Bureau, Kentucky is a Southern state, more specifically in the East South Central region. Kentucky is one of four U.S. states constituted as a commonwealth...
.