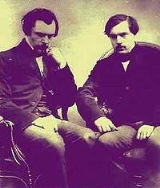 Encyclopedia
The Goncourt brothers were Edmond de Goncourt
Edmond de Goncourt
Edmond de Goncourt , born Edmond Louis Antoine Huot de Goncourt, was a French writer, literary critic, art critic, book publisher and the founder of the Académie Goncourt.-Biography:...
(ɛdmɔ̃, 1822–96) and Jules de Goncourt
Jules de Goncourt
Jules de Goncourt , born Jules Alfred Huot de Goncourt, was a French writer, who published books together with his brother Edmond.- Works :With Edmond de Goncourt:* Sœur Philomène...
(ʒil, 1830–70), both French
France
The French Republic , The French Republic , The French Republic , (commonly known as France , is a unitary semi-presidential republic in Western Europe with several overseas territories and islands located on other continents and in the Indian, Pacific, and Atlantic oceans. Metropolitan France...
naturalist
Naturalism (literature)
Naturalism was a literary movement taking place from the 1880s to 1940s that used detailed realism to suggest that social conditions, heredity, and environment had inescapable force in shaping human character...
writers. They formed a partnership that "is possibly unique in literary history. Not only did they write all their books together, they did not spend more than a day apart in their adult lives, until they were finally parted by Jules's death in 1870." They are known for their literary work and for their diaries, which offer a intimate view into the French literary society of the later nineteenth century.

Their career as writers began with an account of a sketching holiday together. They published books on aspects of 18th-century French art and society (e.g., Portraits intimes du XVIII siecle), dismissing the vulgarity of the Second Empire
Second French Empire
The Second French Empire or French Empire was the Imperial Bonapartist regime of Napoleon III from 1852 to 1870, between the Second Republic and the Third Republic, in France.-Rule of Napoleon III:...
in favour of a more refined age. They wrote the long Journal des Goncourt from 1851, which gives an interesting, at times spiteful view of the literary and social life of their time. They also published six novels, of which Germinie Lacerteux, 1865, was the fourth. It is based on the true case of their own maidservant, Rose Malingre, whose double life they had never suspected. Though their emphasis on pathological cases occasionally trumped their psychological delicacy, their impressionist style nonetheless had an intense and original precision.