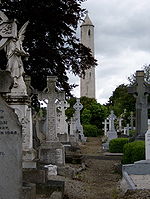 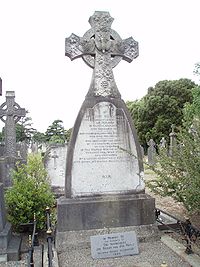 Glasnevin Cemetery officially known as Prospect Cemetery, is the largest non-denominational cemetery in Ireland
Republic of Ireland
Ireland , described as the Republic of Ireland , is a sovereign state in Europe occupying approximately five-sixths of the island of the same name. Its capital is Dublin. Ireland, which had a population of 4.58 million in 2011, is a constitutional republic governed as a parliamentary democracy,...
with an estimated 1.5 million burials. It first opened in 1832 and is located in Glasnevin
Glasnevin
Glasnevin is a largely residential neighbourhood of Dublin, Ireland.-Geography:A mainly residential neighbourhood, it is located on the Northside of the city of Dublin . It was originally established on the northern bank of the River Tolka...
, Dublin.

Prior to the establishment of Glasnevin Cemetery, Irish Catholics had no cemeteries of their own in which to bury their dead and as the repressive Penal Laws of the eighteenth century placed heavy restrictions on the public performance of Catholic services, it had become normal practice for Catholics to conduct a limited version of their own funeral services in Protestant cemeteries. This situation continued until an incident at a funeral held at St. Kevin's Cemetery in 1823, provoked public outcry when a Protestant sexton reprimanded a Catholic priest for proceeding to perform a limited version of a funeral mass.

Glasnevin Cemetery was consecrated and opened to the public for the first time on 21st February 1832. The first burial, that of four year old Michael Casey from Francis Street in Dublin, took place on the following day in a section of the cemetery known as Curran's Square.
The cemetery was initially known as Prospect Cemetery, a name chosen from the townland of Prospect which surrounded the cemetery lands. Originally covering nine acres of ground, the area of the cemetery has now grown to approximately 124 acres. This includes its expansion on the southern side of the Finglas
Finglas
-See also:* List of towns and villages in Ireland* List of abbeys and priories in Ireland...
Road with the section called St. Paul's. The option of cremation
Cremation
Cremation is the process of reducing bodies to basic chemical compounds such as gasses and bone fragments. This is accomplished through high-temperature burning, vaporization and oxidation....
has been provided since March 1982.

Glasnevin Cemetery remains under the care of the Dublin Cemeteries Committee. The development of the cemetery is an ongoing task with major expansion and refurbishment work being carried out at the present time.
The Catholic Mass
Mass (liturgy)
"Mass" is one of the names by which the sacrament of the Eucharist is called in the Roman Catholic Church: others are "Eucharist", the "Lord's Supper", the "Breaking of Bread", the "Eucharistic assembly ", the "memorial of the Lord's Passion and Resurrection", the "Holy Sacrifice", the "Holy and...
is celebrated by members of the parish clergy every Sunday at 9.45 a.m. The annual blessing of the graves takes place each summer as it has done since the foundation of the cemetery in 1832.

The cemetery is located in Glasnevin, Dublin, in two parts. The main part, with its trademark high walls and watchtowers, is located on one side of the road from Finglas to the city centre, while the other part, "St. Paul's," is located across the road and beyond a green space, between two railway lines.

The cemetery contains historically notable monuments and the graves of many of Ireland's most prominent national figures. These include the graves of Daniel O'Connell
Daniel O'Connell
Daniel O'Connell Daniel O'Connell Daniel O'Connell (6 August 1775 – 15 May 1847; often referred to as The Liberator, or The Emancipator, was an Irish political leader in the first half of the 19th century...
, Charles Stewart Parnell
Charles Stewart Parnell
Charles Stewart Parnell was an Irish landowner, nationalist political leader, land reform agitator, and the founder and leader of the Irish Parliamentary Party...
, Michael Collins
Michael Collins (Irish leader)
Michael "Mick" Collins was an Irish revolutionary leader, Minister for Finance and Teachta Dála for Cork South in the First Dáil of 1919, Director of Intelligence for the IRA, and member of the Irish delegation during the Anglo-Irish Treaty negotiations. Subsequently, he was both Chairman of the...
, Éamon de Valera
Éamon de Valera
Éamon de Valera was one of the dominant political figures in twentieth century Ireland, serving as head of government of the Irish Free State and head of government and head of state of Ireland...
, Arthur Griffith
Arthur Griffith
Arthur Griffith was the founder and third leader of Sinn Féin. He served as President of Dáil Éireann from January to August 1922, and was head of the Irish delegation at the negotiations in London that produced the Anglo-Irish Treaty of 1921.-Early life:...
, Maude Gonne, Kevin Barry
Kevin Barry
Kevin Gerard Barry was the first Irish republican to be executed by the British since the leaders of the Easter Rising. Barry was sentenced to death for his part in an IRA operation which resulted in the deaths of three British soldiers.Barry's death is considered a watershed moment in the Irish...
, Roger Casement
Roger Casement
Roger David Casement —Sir Roger Casement CMG between 1911 and shortly before his execution for treason, when he was stripped of his British honours—was an Irish patriot, poet, revolutionary, and nationalist....
, Constance Markievicz, Pádraig Ó Domhnaill
Patrick O'Donnell (Invincible)
Pádraig "Mhícheál Airt" Ó Domhnaill or Patrick O'Donnell, was an Irish republican who was responsible for killing James Carey, leader of the group that carried out the Phoenix Park Murders in Dublin, Ireland.- The Phoenix Park murders and Carey's death :On 6 May 1882, the most senior Irish civil...
, Seán MacBride
Seán MacBride
Seán MacBride was an Irish government minister and prominent international politician as well as a Chief of Staff of the IRA....
, Jeremiah O'Donovan Rossa
Jeremiah O'Donovan Rossa
Jeremiah O'Donovan Rossa , was an Irish Fenian leader and prominent member of the Irish Republican Brotherhood. His life as an Irish Fenian is well documented but he is perhaps known best in death for the graveside oration given at his funeral by Pádraig Pearse.-Life in Ireland:He was born at...
, Frank Duff, Brendan Behan
Brendan Behan
Brendan Francis Behan was an Irish poet, short story writer, novelist, and playwright who wrote in both Irish and English. He was also an Irish republican and a volunteer in the Irish Republican Army.-Early life:...
, Christy Brown
Christy Brown
Christy Brown was an Irish author, painter and poet who had cerebral palsy. He is most famous for his autobiography My Left Foot, which was later made into an Academy Award-winning film of the same name....
, and Luke Kelly
Luke Kelly
Luke Kelly was an Irish singer and folk musician from Dublin, Ireland, notable as a founding member of the band The Dubliners.-Early life:...
of the Dubliners
Dubliners
Dubliners is a collection of 15 short stories by James Joyce, first published in 1914. They were meant to be a naturalistic depiction of Irish middle class life in and around Dublin in the early years of the 20th century....
.

The cemetery also offers a view of the changing style of death monuments in Ireland over the last 200 years: from the austere, simple, high stone erections of the period up until the 1860s, to the elaborate Celtic cross
Celtic cross
A Celtic cross is a symbol that combines a cross with a ring surrounding the intersection. In the Celtic Christian world it was combined with the Christian cross and this design was often used for high crosses – a free-standing cross made of stone and often richly decorated...
es of the nationalistic revival from the 1860s to 1960s, to the plain Italian marble of the late twentieth century. Glasnevin Cemetery has grown from its original nine to over 120 acre (0.4856232 km²).

The high wall with watch-towers surrounding the main part of the cemetery was built to deter bodysnatchers
Body-snatching
Body snatching is the secret disinterment of corpses from graveyards. A common purpose of body snatching is to sell the corpses for dissection or anatomy lectures in medical schools...
, who were active in Dublin in the 18th and early 19th century. The watchmen also had a pack of blood-hounds who roamed the cemetery at night. Prime Minister, Robert Peel, when questioned in Parliament on the activities of the body-snatchers, admitted that it was, indeed, a "grave matter".

Glasnevin is one of the few cemeteries that allowed stillborn babies to be buried in consecrated ground and contains an area called the Angels Plot.

In 1982 a crematorium was constructed within the cemetery grounds by Glasnevin Trust. Since then, the service has been used for people of various religious denominations who wished to be cremated. Boyzone singer Stephen Gately
Stephen Gately
Stephen Patrick David Gately was an Irish pop singer–songwriter, actor, dancer, musician and author, who, with Ronan Keating, was one of two lead singers of the pop group Boyzone. All of Boyzone's studio albums hit number one in the United Kingdom, their third being their most successful...
was cremated at Glasnevin Crematorium within the cemetery grounds in October 2009.

Glasnevin Cemetery is the setting for the "Hades" episode in James Joyce
James Joyce
James Augustine Aloysius Joyce was an Irish novelist and poet, considered to be one of the most influential writers in the modernist avant-garde of the early 20th century...
's Ulysses
Ulysses (novel)
Ulysses is a novel by the Irish author James Joyce. It was first serialised in parts in the American journal The Little Review from March 1918 to December 1920, and then published in its entirety by Sylvia Beach on 2 February 1922, in Paris. One of the most important works of Modernist literature,...
.