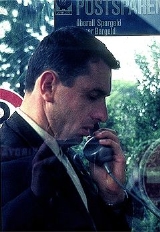 Encyclopedia
Gerhard Karl Mitter was a German
Germany
Germany , officially the Federal Republic of Germany , is a federal parliamentary republic in Europe. The country consists of 16 states while the capital and largest city is Berlin. Germany covers an area of 357,021 km2 and has a largely temperate seasonal climate...
Formula One
Formula One
Formula One, also known as Formula 1 or F1 and referred to officially as the FIA Formula One World Championship, is the highest class of single seater auto racing sanctioned by the Fédération Internationale de l'Automobile . The "formula" designation in the name refers to a set of rules with which...
and sportscar driver.

Mitter was born in Schönlinde (Krásná Lípa
Krásná Lípa
Krásná Lípa is a town in the Ústí nad Labem Region of the Czech Republic. It has c. 3,500 inhabitants.- History :In 1361, a settlement was recorded on the Tollenstein . Later, about 30 families from Upper Franconia colonized the place. In 1654 the community had 36 farm houses and 60 craftsman...
) in Czechoslovakia
Czechoslovakia
Czechoslovakia or Czecho-Slovakia was a sovereign state in Central Europe which existed from October 1918, when it declared its independence from the Austro-Hungarian Empire, until 1992...
, but his family was expelled
Expulsion of Germans after World War II
The later stages of World War II, and the period after the end of that war, saw the forced migration of millions of German nationals and ethnic Germans from various European states and territories, mostly into the areas which would become post-war Germany and post-war Austria...
from there, to Leonberg
Leonberg
Leonberg is a town in the German federal state of Baden-Wuerttemberg about 10 miles to the west of Stuttgart, the state capital. Approximately 45,000 people live in Leonberg, making it the third biggest borough in the rural district of Böblingen .Leonberg is most famous for its picturesque market...
near Stuttgart
Stuttgart
Stuttgart is the capital of the state of Baden-Württemberg in southern Germany. The sixth-largest city in Germany, Stuttgart has a population of 600,038 while the metropolitan area has a population of 5.3 million ....
.

In sportscar racing and hillclimbing
Hillclimbing
Hillclimbing is a branch of motorsport in which drivers compete against the clock to complete an uphill course....
for Porsche
Porsche in motorsport
Porsche has been successful in many branches of motorsport of which most have been in long distance races.Despite their early involvement in motorsports being limited to supplying relatively small engines to racing underdogs up until the late 1960s, by the mid-1950s Porsche had already tasted...
, he scored many wins, e.g. the 1966-1968 European Hillclimb Championships against Ferrari
Ferrari
Ferrari S.p.A. is an Italian sports car manufacturer based in Maranello, Italy. Founded by Enzo Ferrari in 1929, as Scuderia Ferrari, the company sponsored drivers and manufactured race cars before moving into production of street-legal vehicles as Ferrari S.p.A. in 1947...
, the 1968 24 Hours of Daytona
24 Hours of Daytona
The 24 Hours of Daytona, currently known as the Rolex 24 Daytona for sponsorship reasons, is a 24-hour sports car endurance race held annually at Daytona International Speedway in Daytona Beach, Florida. It is run on a combined road course, utilizing portions of the NASCAR tri-oval and an infield...
(Porsche 907
Porsche 907
The Porsche 907 was a sportscar racing prototype built by Porsche in 1967 and 1968.- 1967 :The 907 was introduced at the 1967 24 Hours of Le Mans...
) and the 1969 Targa Florio
Targa Florio
The Targa Florio was an open road endurance automobile race held in the mountains of Sicily near Palermo. Founded in 1906, it was the oldest sports car racing event, part of the World Sportscar Championship between 1955 and 1973...
(Porsche 908
Porsche 908
The Porsche 908 was a racing car from Porsche, introduced in 1968 to continue the Porsche 906/Porsche 910/Porsche 907 series of models designed under Ferdinand Piech....
) as his final major win.

Due to the long Nürburgring
Nürburgring
The Nürburgring is a motorsport complex around the village of Nürburg, Germany. It features a modern Grand Prix race track built in 1984, and a much longer old North loop track which was built in the 1920s around the village and medieval castle of Nürburg in the Eifel mountains. It is located about...
track, it was possible to take part in the German Grand Prix
German Grand Prix
The German Grand Prix is an annual automobile race.Because Germany was banned from taking part in international events after World War II, the German GP only became part of the Formula One World Championship in 1951...
with Formula 2 cars that were classified in their own contest. Mitter was killed there at Schwedenkreuz while practising for the 1969 German Grand Prix
1969 German Grand Prix
The 1969 German Grand Prix was a Formula One race held at Nürburgring on 3 August 1969 with Formula Two cars competing by invitation. It was the seventh round of the 1969 World Championship for Drivers. The F2 entrants were not eligible for points in the World Championship.-Report:Gerhard Mitter...
with BMW's 269 F2 project. As a suspension or steering failure was suspected, the BMW team with Hubert Hahne
Hubert Hahne
-Career:He participated in five Formula One World Championship Grands Prix, two of those at the wheel of Formula Two cars, and one non-Championship Formula One race.Hahne was successful in touring car racing, e.g. the European Touring Car Championship...
and Dieter Quester
Dieter Quester
Dieter Quester is an active touring car racing driver from Austria. Dieter has participated in 53 24-Hour Races. He competed in a single Formula One race in which he finished ninth....
withdrew from the race, as did Mitter's teammate at Porsche, Hans Herrmann
Hans Herrmann
Hans Herrmann is a former Formula One and Sports car racing driver from Stuttgart, Germany.In F1, he participated in 19 World Championship Grands Prix, debuting on August 2, 1953...
. Udo Schütz
Udo Schütz
Udo Schütz is a German entrepreneur, who was competing successfully with racing cars in the 1960s, and with yachts in the 1990s.His career began in the early 1960s...
, his driving partner at Porsche in the 1969 World Sportscar Championship season
1969 World Sportscar Championship season
The 1969 World Sportscar Championship season was the 17th season of the FIA World Sportscar Championship. It featured the 1969 International Championship for Makes , which was a series for FIA Group 6 Prototype Sports Cars, Group 4 Sports Cars and Group 3 Grand Touring Cars and the 1969...
which whom he had won the Targa three months earlier, had survived a bad crash at the 1969 24 Hours of Le Mans
1969 24 Hours of Le Mans
The 1969 24 Hours of Le Mans was the 37th Grand Prix of Endurance, and took place on June 14 and 15 1969. It was the eighth round of the 1969 International Championship for Makes....
, and retired.