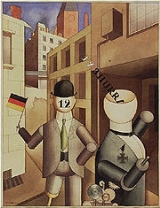 Encyclopedia
Georg Ehrenfried Groß was a German artist known especially for his savagely caricatural
Caricature
A caricature is a portrait that exaggerates or distorts the essence of a person or thing to create an easily identifiable visual likeness. In literature, a caricature is a description of a person using exaggeration of some characteristics and oversimplification of others.Caricatures can be...
drawings of Berlin
Berlin
Berlin is the capital city of Germany and is one of the 16 states of Germany. With a population of 3.45 million people, Berlin is Germany's largest city. It is the second most populous city proper and the seventh most populous urban area in the European Union...
life in the 1920s. He was a prominent member of the Berlin Dada
Dada
Dada or Dadaism is a cultural movement that began in Zurich, Switzerland, during World War I and peaked from 1916 to 1922. The movement primarily involved visual arts, literature—poetry, art manifestoes, art theory—theatre, and graphic design, and concentrated its anti-war politics through a...
and New Objectivity
New Objectivity
The New Objectivity is a term used to characterize the attitude of public life in Weimar Germany as well as the art, literature, music, and architecture created to adapt to it...
group during the Weimar Republic
Weimar Republic
The Weimar Republic is the name given by historians to the parliamentary republic established in 1919 in Germany to replace the imperial form of government...
before he emigrated to the United States in 1933. 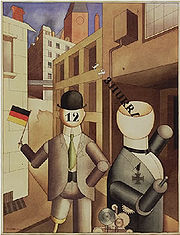 George Grosz was born Georg Ehrenfried Groß in Berlin
Berlin
Berlin is the capital city of Germany and is one of the 16 states of Germany. With a population of 3.45 million people, Berlin is Germany's largest city. It is the second most populous city proper and the seventh most populous urban area in the European Union...
, Germany, the son of a pub owner. His parents were devoutly Lutheran. Grosz grew up in the Pomeranian
Farther Pomerania
Farther Pomerania, Further Pomerania, Transpomerania or Eastern Pomerania , which before the German-Polish border shift of 1945 comprised the eastern part of the Duchy, later Province of Pomerania, roughly stretching from the Oder River in the West to Pomerelia in the East...
town of Stolp, where his mother became the keeper of the local Hussar's Officers' mess after his father died in 1901. At the urging of his cousin, the young Grosz began attending a weekly drawing class taught by a local painter named Grot. Grosz developed his skills further by drawing meticulous copies of the drinking scenes of Eduard Grutzner, and by drawing imaginary battle scenes. From 1909–1911, he studied at the Dresden Academy of Fine Arts, where his teachers were Richard Müller, Robert Sterl, Raphael Wehle, and Oskar Schindler. He subsequently studied at the Berlin College of Arts and Crafts under Emil Orlik
Emil Orlík
Emil Orlik was born in Prague, which was at that time part of the Austro-Hungarian Empire, and lived and worked in Prague, Austria and Germany...
.

In November 1914 Grosz volunteered for military service, in the hope that by thus preempting conscription he would avoid being sent to the front. He was given a discharge after hospitalization for sinusitis
Sinusitis
Sinusitis is inflammation of the paranasal sinuses, which may be due to infection, allergy, or autoimmune issues. Most cases are due to a viral infection and resolve over the course of 10 days...
in 1915. In 1916 he changed the spelling of his name to George Grosz as a protest against German nationalism and out of a romantic enthusiasm for America that originated in his early reading of the books of James Fenimore Cooper
James Fenimore Cooper
James Fenimore Cooper was a prolific and popular American writer of the early 19th century. He is best remembered as a novelist who wrote numerous sea-stories and the historical novels known as the Leatherstocking Tales, featuring frontiersman Natty Bumppo...
, Bret Harte
Bret Harte
Francis Bret Harte was an American author and poet, best remembered for his accounts of pioneering life in California.- Life and career :...
and Karl May
Karl May
Karl Friedrich May was a popular German writer, noted mainly for adventure novels set in the American Old West, and similar books set in the Orient and Middle East . In addition, he wrote stories set in his native Germany, in China and in South America...
, and which he retained for the rest of his life. (His artist friend and collaborator Helmut Herzfeld changed his name to John Heartfield
John Heartfield
John Heartfield is the anglicized name of the German photomontage artist Helmut Herzfeld...
at the same time.) In January 1917 he was drafted for service, but in May he was discharged as permanently unfit.

Grosz was arrested during the Spartakus uprising in January 1919, but escaped using fake identification documents; he joined the Communist Party of Germany
Communist Party of Germany
The Communist Party of Germany was a major political party in Germany between 1918 and 1933, and a minor party in West Germany in the postwar period until it was banned in 1956...
(KPD) in the same year. In 1921 Grosz was accused of insulting the army
Reichswehr
The Reichswehr formed the military organisation of Germany from 1919 until 1935, when it was renamed the Wehrmacht ....
, which resulted in a 300 German Mark fine and the destruction of the collection Gott mit uns
Gott Mit Uns
Gott mit uns is a phrase commonly associated with the German military from the German Empire to the end of the Third Reich, although its historical origins are far older, ultimately tracing back to the Hebrew term Immanuel from the Bible...
("God with us"), a satire on German society. Grosz left the KPD in 1922 after having spent five months in Russia and meeting Lenin
Vladimir Lenin
Vladimir Ilyich Lenin was a Russian Marxist revolutionary and communist politician who led the October Revolution of 1917. As leader of the Bolsheviks, he headed the Soviet state during its initial years , as it fought to establish control of Russia in the Russian Civil War and worked to create a...
and Trotsky
Leon Trotsky
Leon Trotsky , born Lev Davidovich Bronshtein, was a Russian Marxist revolutionary and theorist, Soviet politician, and the founder and first leader of the Red Army....
, because of his antagonism to any form of dictatorial authority.

In America, Grosz determined to make a clean break with his past, and changed his style and subject matter. He continued to exhibit regularly, and in 1946 he published his autobiography, A Little Yes and a Big No
A little yes and a big no
A Little Yes and a Big No is the 1946 autobiography of German artist George Grosz. The first edition was published by The Dial Press in New York City, and was translated by Lola Sachs Dorin. In 1998 the University of California Press published a 1955 translation of Grosz's text by Nora Hodges...
. In the 1950s he opened a private art school at his home and also worked as Artist in Residence at the Des Moines Art Center
Des Moines Art Center
The Des Moines Art Center is an art museum with an extensive collection of paintings, sculpture, modern art and mixed media. It was established in 1948 in Des Moines, Iowa.-Description:...
. Grosz was elected to the American Academy of Arts and Letters in 1954. Though he had US citizenship, he resolved to return to Berlin, where he died on July 6, 1959 from the effects of falling down a flight of stairs after a night of drinking.

In 1960, Grosz was the subject of the Oscar-nominated short film George Grosz' Interregnum
George Grosz' Interregnum
George Grosz' Interregnum is a 29-minute long documentary film about the artist George Grosz produced by Altina Carey and Charles Carey, and narrated by Lotte Lenya. It was nominated for an Academy Award for Best Documentary Short. The original music was by Paul Glass, and the cinematography by...
. In 2002, actor Kevin McKidd
Kevin McKidd
Kevin McKidd is a Scottish television and film actor and director. Before playing the role of Owen Hunt in Grey's Anatomy, McKidd starred as Lucius Vorenus in the historical drama series Rome, and provided the voice of Captain John "Soap" Mactavish in Call of Duty: Modern Warfare 2 and the sequel...
portrayed Grosz in a supporting role as an eager artist seeking exposure in a fictional film entitled Max
Max (film)
Max is a 2002 British/Hungarian/Canadian fictional drama film, that depicts a friendship between a Jewish art dealer, Max Rothman, and a young Austrian painter, Adolf Hitler...
, regarding Adolf Hitler
Adolf Hitler
Adolf Hitler was an Austrian-born German politician and the leader of the National Socialist German Workers Party , commonly referred to as the Nazi Party). He was Chancellor of Germany from 1933 to 1945, and head of state from 1934 to 1945...
's youth. 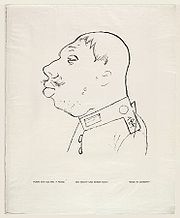 Although Grosz made his first oil paintings in 1912 while still a student,
his earliest oils that can be identified today date from 1916.
By 1914, Grosz worked in a style influenced by Expressionism
Expressionism
Expressionism was a modernist movement, initially in poetry and painting, originating in Germany at the beginning of the 20th century. Its typical trait is to present the world solely from a subjective perspective, distorting it radically for emotional effect in order to evoke moods or ideas...
and Futurism
Futurism
Futurism was an artistic and social movement that originated in Italy in the early 20th century.Futurism or futurist may refer to:* Afrofuturism, an African-American and African diaspora subculture* Cubo-Futurism* Ego-Futurism...
, as well as by popular illustration, graffiti
Graffiti
Graffiti is the name for images or lettering scratched, scrawled, painted or marked in any manner on property....
, and children's drawings. Sharply outlined forms are often treated as if transparent. The City (1916–17) was the first of his many paintings of the modern urban scene. Other examples include the apocalyptic Explosion (1917), Metropolis (1917), and The Funeral
The Funeral (Grosz)
The Funeral is a painting by the German Expressionist artist George Grosz completed between 1917 and 1918...
, a 1918 painting depicting a mad funeral procession.

After his emigration to the USA in 1933, Grosz "sharply rejected [his] previous work, and caricature in general." In place of his earlier corrosive vision of the city, he now painted conventional nudes and many landscape
Landscape art
Landscape art is a term that covers the depiction of natural scenery such as mountains, valleys, trees, rivers, and forests, and especially art where the main subject is a wide view, with its elements arranged into a coherent composition. In other works landscape backgrounds for figures can still...
watercolors. More acerbic works, such as Cain, or Hitler in Hell (1944), were the exception. In his autobiography, he wrote: "A great deal that had become frozen within me in Germany melted here in America and I rediscovered my old yearning for painting. I carefully and deliberately destroyed a part of my past." Although a softening of his style had been apparent since the late 1920s, Grosz's work turned toward a sentimental romanticism
Romanticism
Romanticism was an artistic, literary and intellectual movement that originated in the second half of the 18th century in Europe, and gained strength in reaction to the Industrial Revolution...
in America, a change generally seen as a decline.