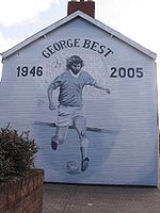 What number did George best wear for the LA Aztecs?
More

"I spent a lot of money on booze, birds and fast cars. The rest I just squandered."

[On David Beckham:] "He cannot kick with his left foot, he cannot head a ball, he cannot tackle and he doesn't score many goals. Apart from that he's all right."

"If I had been born ugly, you would never have heard of Pelé."

"Pelé called me the greatest footballer in the world. That is the ultimate salute to my life."

"I've stopped drinking, but only while I'm asleep."