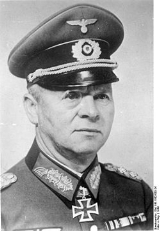 Stumme had achieved the rank of Generalleutnant by the beginning of the war. He commanded the 2nd Light Division (later the 7th Panzer Division) in the attack on Poland
Poland
Poland , officially the Republic of Poland , is a country in Central Europe bordered by Germany to the west; the Czech Republic and Slovakia to the south; Ukraine, Belarus and Lithuania to the east; and the Baltic Sea and Kaliningrad Oblast, a Russian exclave, to the north...
in 1939. Replaced by Erwin Rommel
Erwin Rommel
Erwin Johannes Eugen Rommel , popularly known as the Desert Fox , was a German Field Marshal of World War II. He won the respect of both his own troops and the enemies he fought....
in 1940, he was appointed as commander of the 40th Panzer Corps, which was sent to Bulgaria
Bulgaria
Bulgaria , officially the Republic of Bulgaria , is a parliamentary democracy within a unitary constitutional republic in Southeast Europe. The country borders Romania to the north, Serbia and Macedonia to the west, Greece and Turkey to the south, as well as the Black Sea to the east...
and participated in the attacks on Yugoslavia
Yugoslavia
Yugoslavia refers to three political entities that existed successively on the western part of the Balkans during most of the 20th century....
and Greece
Greece
Greece , officially the Hellenic Republic , and historically Hellas or the Republic of Greece in English, is a country in southeastern Europe....
. In Operation Barbarossa
Operation Barbarossa
Operation Barbarossa was the code name for Germany's invasion of the Soviet Union during World War II that began on 22 June 1941. Over 4.5 million troops of the Axis powers invaded the USSR along a front., the largest invasion in the history of warfare...
Stumme served under Field Marshal Fedor von Bock
Fedor von Bock
Fedor von Bock was a German Generalfeldmarshall who served in the Wehrmacht during the Second World War. As a leader who lectured his soldiers about the honor of dying for the German Fatherland, he was nicknamed "Der Sterber"...
. Stumme and his men succeeded in capturing Mozhaisk. He then participated in the attempt to capture Stalingrad.

In June 1942 some German plans were captured by Soviet forces. Hitler blamed Stumme and ordered that he be court-martialed. He was found guilty and was sentenced to five years imprisonment, but von Bock secured his release. Stumme was then sent to North Africa to join the Afrika Korps
Afrika Korps
The German Africa Corps , or the Afrika Korps as it was popularly called, was the German expeditionary force in Libya and Tunisia during the North African Campaign of World War II...
, which was confronting the British at El Alamein. During the temporary absence of Erwin Rommel
Erwin Rommel
Erwin Johannes Eugen Rommel , popularly known as the Desert Fox , was a German Field Marshal of World War II. He won the respect of both his own troops and the enemies he fought....
, he commanded Panzer Army Africa
Panzer Army Africa
As the number of German armed forces committed to the North Africa Campaign of World War II grew from the initial commitment of a small corps the Germans developed a more elaborate command structure and placed the now larger Afrika Korps, with Italian units under this new German command structure,...
(combined German and Italian forces) when the British attacked.