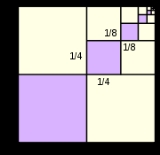 Overview
In mathematics
Mathematics
Mathematics is the study of quantity, space, structure, and change. Mathematicians seek out patterns and formulate new conjectures. Mathematicians resolve the truth or falsity of conjectures by mathematical proofs, which are arguments sufficient to convince other mathematicians of their validity...
, a geometric series is a series
Series (mathematics)
A series is the sum of the terms of a sequence. Finite sequences and series have defined first and last terms, whereas infinite sequences and series continue indefinitely....
with a constant ratio between successive terms
Term (mathematics)
A term is a mathematical expression which may form a separable part of an equation, a series, or another expression.-Definition:In elementary mathematics, a term is either a single number or variable, or the product of several numbers or variables separated from another term by a + or - sign in an...
. For example, the series

is geometric, because each successive can be obtained by multiplying the previous term by 1 / 2.

Geometric series are one of the simplest examples of infinite series with finite sums, although not all of them have this property.

Which of the following gives the general rule for simplifying the product of two powers with the same base? A. Multiply the bases, and multip...

In the expression 3cubed, what does the value of the exponent indicate? A. the number being used as a factor B. the number by which ...
More
x