Encyclopedia
A geologic or geomorphic province is a spatial entity with common geologic
Geology
Geology is the science comprising the study of solid Earth, the rocks of which it is composed, and the processes by which it evolves. Geology gives insight into the history of the Earth, as it provides the primary evidence for plate tectonics, the evolutionary history of life, and past climates...
or geomorphic
Geomorphology
Geomorphology is the scientific study of landforms and the processes that shape them...
attributes. A province may include a single dominant structural element such as a basin
Basin (geology)
A structural basin is a large-scale structural formation of rock strata formed by tectonic warping of previously flat lying strata. Structural basins are geological depressions, and are the inverse of domes. Some elongated structural basins are also known as synclines...
or a fold belt
Fold (geology)
The term fold is used in geology when one or a stack of originally flat and planar surfaces, such as sedimentary strata, are bent or curved as a result of permanent deformation. Synsedimentary folds are those due to slumping of sedimentary material before it is lithified. Folds in rocks vary in...
, or a number of contiguous related elements. Adjoining provinces may be similar in structure but be considered separate due to differing histories.

Geologic provinces based on origin: 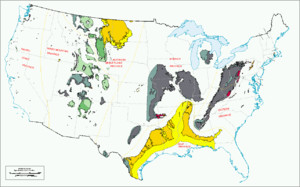 Some studies classify provinces based upon mineral resources, such as mineral
Mineral
A mineral is a naturally occurring solid chemical substance formed through biogeochemical processes, having characteristic chemical composition, highly ordered atomic structure, and specific physical properties. By comparison, a rock is an aggregate of minerals and/or mineraloids and does not...
deposits. There are a particularly large number of provinces identified worldwide for petroleum
Petroleum
Petroleum or crude oil is a naturally occurring, flammable liquid consisting of a complex mixture of hydrocarbons of various molecular weights and other liquid organic compounds, that are found in geologic formations beneath the Earth's surface. Petroleum is recovered mostly through oil drilling...
and other mineral fuels, such as the Niger Delta petroleum province
Niger Delta province
The Niger Delta province is a geologic province in the Niger Delta of West Africa also known as the Niger Delta Basin. The province contains one petroleum system, the "Tertiary Niger Delta Petroleum System" , the majority of which lies within the borders of Nigeria, with suspected or proven...
.
The source of this article is wikipedia, the free encyclopedia.  The text of this article is licensed under the GFDL.