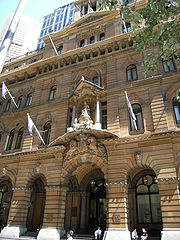 The General Post Office (abbreviation GPO) is a landmark building in Sydney
Sydney
Sydney is the most populous city in Australia and the state capital of New South Wales. Sydney is located on Australia's south-east coast of the Tasman Sea. As of June 2010, the greater metropolitan area had an approximate population of 4.6 million people...
, Australia
Australia
Australia , officially the Commonwealth of Australia, is a country in the Southern Hemisphere comprising the mainland of the Australian continent, the island of Tasmania, and numerous smaller islands in the Indian and Pacific Oceans. It is the world's sixth-largest country by total area...
. It is located at the western end of Martin Place (No. 1 Martin Place), between George
George Street, Sydney
George Street is one of Sydney's most notable city streets. There are more high rise buildings and more ASX 100 companies located here than anywhere else in Australia, and is well known for being busy around-the-clock...
and Pitt
Pitt Street, Sydney
Pitt Street is a major street in central Sydney, New South Wales, Australia. The street runs through the entire city centre from Circular Quay in the north to Waterloo, although today's street is in two disjointed sections after a substantial stretch of it was removed to make way for Sydney's...
Streets. The main facade stretches some 100 metres down Martin Place. In 1996, as part of the disbursement of Australia Post
Australia Post
Australia Post is the trading name of the Australian Government-owned Australian Postal Corporation .-History:...
assets by the Federal Government of Australia, the building was sold to private owners. It was subsequently refurbished and now houses shops, restaurants, hotel rooms, and the lobby of two adjoining tower blocks.

Postal services have moved. Counter services are at the Pitt Street Post Office. General Post Office post boxes and Poste restante
Poste restante
Poste restante or general delivery is a service where the post office holds mail until the recipient calls for it...
services are now located in the Australia Post
Australia Post
Australia Post is the trading name of the Australian Government-owned Australian Postal Corporation .-History:...
site in the Hunter Connection, on the corner of George Street
George Street, Sydney
George Street is one of Sydney's most notable city streets. There are more high rise buildings and more ASX 100 companies located here than anywhere else in Australia, and is well known for being busy around-the-clock...
and Hunter Street
Hunter Street, Sydney
Hunter Street is a cross street in the Central Business District of Sydney, New South Wales, Australia. It stretches from George Street in the west to Macquarie St in the east. The street was originally named Bell Street. It is named after Governor Hunter, the second Governor of NSW....
.

Designed by colonial architect James Barnet
James Barnet
James Johnstone Barnet was the Colonial Architect for New South Wales from 1862 - 1890.-Life and career:Barnet was born at Almericlose, Arbroath, Scotland. The son of a builder, he was educated at the local high school...
, the building was constructed in stages from 1866 to 1891. (The former GPO was demolished in 1862 but one of its six columns still stands in Mount Street Plaza, North Sydney
North Sydney, New South Wales
North Sydney is a suburb and commercial district on the Lower North Shore of Sydney, in the state of New South Wales, Australia. North Sydney is located 3 kilometres north of the Sydney central business district and is the administrative centre for the local government area of North Sydney...
http://www.northsydney.nsw.gov.au/resources/documents/33_setinstone.pdf. Another can be found off Bradley's Head, Mosman.)

The clock tower was demolished in 1942 to reduce the visibility of the GPO in case of an air attack on Sydney. It was rebuilt in 1964.

Barnet's building features a neo-classical sandstone
Sydney sandstone
Sydney sandstone is the common name for Sydney Basin Hawkesbury Sandstone, historically known as Yellowblock, is a sedimentary rock named after the Hawkesbury River north of Sydney, where this sandstone is particularly common....
facade, with a colonnade running around the building at street level. Each arch of the colonnade features a carved face on the keystone (representing many parts of the British Empire
British Empire
The British Empire comprised the dominions, colonies, protectorates, mandates and other territories ruled or administered by the United Kingdom. It originated with the overseas colonies and trading posts established by England in the late 16th and early 17th centuries. At its height, it was the...
and other foreign lands), and spandrel
Spandrel
A spandrel, less often spandril or splaundrel, is the space between two arches or between an arch and a rectangular enclosure....
figures, whose comical references to real-life personalities (including Barnet himself) caused a controversy at the time of construction. At the centre of its 100-metre Martin Place facade is a white marble statuory group, featuring Queen Victoria flanked by allegorical figures. Above this stands the clocktower.