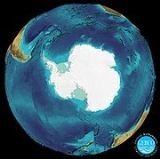 Encyclopedia
The General Bathymetric Chart of the Oceans (GEBCO) is a publicly available bathymetry
Bathymetry
Bathymetry is the study of underwater depth of lake or ocean floors. In other words, bathymetry is the underwater equivalent to hypsometry. The name comes from Greek βαθύς , "deep", and μέτρον , "measure"...
of the world's ocean
Ocean
An ocean is a major body of saline water, and a principal component of the hydrosphere. Approximately 71% of the Earth's surface is covered by ocean, a continuous body of water that is customarily divided into several principal oceans and smaller seas.More than half of this area is over 3,000...
s. The project was conceived with the aim of preparing a global series of charts showing the general shape of the seafloor. Over the years it has become a reference map of the bathymetry of the world’s oceans for scientists and others. 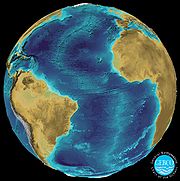 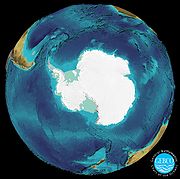 Although originally GEBCO published paper contour charts
Contour line
A contour line of a function of two variables is a curve along which the function has a constant value. In cartography, a contour line joins points of equal elevation above a given level, such as mean sea level...
, today it has moved into the digital age and collects digital depths of the ocean from wherever they are available. GEBCO provides a range of bathymetric data sets and data products, including:

The GEBCO chart series was initiated in 1903 by an international group of geographer
Geographer
A geographer is a scholar whose area of study is geography, the study of Earth's natural environment and human society.Although geographers are historically known as people who make maps, map making is actually the field of study of cartography, a subset of geography...
s and oceanographers, under the leadership of Prince Albert I of Monaco. At that time there was an explosion of interest in the study of the natural world and this group recognized the importance of a set of maps describing the shape of the ocean floor. The first hundred years of the project were described in the book The History of GEBCO 1903-2003 published by GITC in 2003. Nowadays GEBCO’s role has become increasingly important, due to the increased interest in the oceans for scientific research and for the exploitation and conservation of resources.

Since 1903, five separate editions of paper, bathymetric contour charts covering the whole world have been produced. GEBCO is now maintained in digital form as the GEBCO Digital Atlas.