The Gateway began as part of Salt Lake City's urban redevelopment
Urban renewal
Urban renewal is a program of land redevelopment in areas of moderate to high density urban land use. Renewal has had both successes and failures. Its modern incarnation began in the late 19th century in developed nations and experienced an intense phase in the late 1940s – under the rubric of...
project, and the first phase was completed prior to the 2002 Winter Olympics
2002 Winter Olympics
The 2002 Winter Olympics, officially the XIX Olympic Winter Games, were a winter multi-sport event that was celebrated in February 2002 in and around Salt Lake City, Utah, United States. Approximately 2,400 athletes from 77 nations participated in 78 events in fifteen disciplines, held throughout...
that were held in Utah. The first phase included 2.1 million sq. ft. (195,096 m²) of mixed-use development including the Gateway Mall, office complexes, the Northgate Apartments and the renovated depot. Other highlights include the Clark Planetarium
Clark Planetarium
The Clark Planetarium is situated within the Gateway District at the intersection of 400 West and 100 South in downtown Salt Lake City, Utah, USA...
, the Megaplex 12 at The Gateway, the Discovery Gateway
Discovery Gateway
Discovery Gateway, formerly The Children's Museum of Utah , is an interactive, hands-on children's museum located in downtown Salt Lake City, Utah, USA. Comprising over of exhibit space, Discovery Gateway is located at 444 West 100 South in The Gateway.-History:The Children's Museum of Utah was...
children's museum, and the Salt Lake Tribune newspaper. The EnergySolutions Arena
EnergySolutions Arena
EnergySolutions Arena is an indoor arena, in Salt Lake City, Utah, United States, owned by Jazz Basketball Investors, Inc., the estate of Larry H. Miller...
is directly across the street.

In 2004, a new 12-story high-rise condominium
Condominium
A condominium, or condo, is the form of housing tenure and other real property where a specified part of a piece of real estate is individually owned while use of and access to common facilities in the piece such as hallways, heating system, elevators, exterior areas is executed under legal rights...
tower, The Parc at The Gateway, was built overlooking the Olympic Legacy Plaza, with some units selling in excess of $500,000.

The Gateway District is currently undergoing a significant expansion. In the northeast corner, an eight-story 230000 sq ft (21,367.7 m²). office tower is currently being constructed for the sole occupancy of Fidelity Investments
Fidelity Investments
FMR LLC or Fidelity Investments is an American multinational financial services corporation one of the largest mutual fund and financial services groups in the world. It was founded in 1946 and serves North American investors. Fidelity Ventures is its venture capital arm...
. More than 1,200 employees are expected to work there when it is completed in 2007. There is also major construction underway in the northwest corner where additional retail shops are expected to reside. Apple Inc. recently opened a store in one of these newly constructed units. 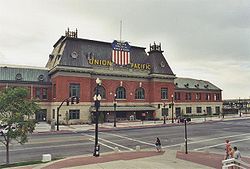