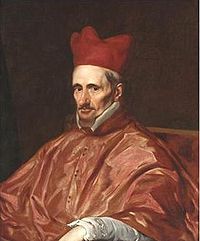 Gaspar de Borja y Velasco (26 June 1580 – 28 December 1645) was a Spanish cardinal, ecclesiastic and politician. He belonged to the house of Borgia (though he always used the Spanish spelling of Borja) and served as Primate of Spain, Archbishop of Seville, Archbishop of Toledo and viceroy of Naples.

Borja was born at Villalpando
Villalpando
Villalpando is a municipality located in the province of Zamora, Castile and León, Spain. According to the 2004 census , the municipality has a population of 1,624 inhabitants. Formerly the town was reputed for its saltpans, the Salinas de Villapando....
. His father was Francisco Tomás de Borja y Centellas, 6th Duke of Gandia
Duke of Gandia
The hereditary Spanish title duke of Gandía was created in 1485 by Ferdinand II of Aragon from the original Italian title "duke of Candia" belonging to the Italian Stato di Mare or Italian Kingdoms of the Mediterranean Sea; originally granted around 1206 to a Genoan marquis member of the House of...
, the son of Francis Borgia
Francis Borgia
Saint Francis Borgia, 4th duke of Gandía, 3rd Father General of the Jesuit Order, Grandee of Spain, was a Spanish Jesuit and third Superior General of the Society of Jesus. He was canonized on 20 June 1670.-Early life:He was born Francesco Borgia de Candia d'Aragon within the Duchy of Gandía,...
(4th Duke of Gandia and 3rd Father-General of the Society of Jesus
Society of Jesus
The Society of Jesus is a Catholic male religious order that follows the teachings of the Catholic Church. The members are called Jesuits, and are also known colloquially as "God's Army" and as "The Company," these being references to founder Ignatius of Loyola's military background and a...
) and thus related to Pope Callixtus III
Pope Callixtus III
Pope Callixtus III , né Alfons de Borja, was Pope from April 8, 1455 to his death in 1458.-Biography:...
and Pope Alexander VI
Pope Alexander VI
Pope Alexander VI , born Roderic Llançol i Borja was Pope from 1492 until his death on 18 August 1503. He is one of the most controversial of the Renaissance popes, and his Italianized surname—Borgia—became a byword for the debased standards of the Papacy of that era, most notoriously the Banquet...
- one historian refers to Gaspar wanting to become the third Borgia pope. Gaspar's mother was Juana Enríquez de Velasco y de Aragón, daughter of Iñigo Tovar y Fernández de Velasco, 4th Duke of Frías
Dukedom of Frías
Duke of Frías is a hereditary title created in 1492 by King Ferdinand II of Aragon. It became one of the most important titles in Spain.The House of Velasco was one of the most powerful and influential noble Castilian families of the Middle Ages and the beginning of the Modern Era. Its original...
and 10th Constable of Castile
Constable of Castile
Constable of Castile was a title created by John I, King of Castile in 1382, to substitute the title Alférez Mayor del Reino. The constable was the second person in power in the kingdom, after the King, and his responsibility was to command the military in the absence of the ruler.In 1473 Henry IV...
.

He graduated from the Universidad Complutense, in the Colegio Mayor de San Ildefonso, with a degree in Theology. He owed his rise through the church hierarchy to Francisco Gómez de Sandoval y Rojas
Francisco Goméz de Sandoval y Rojas, Duke of Lerma
Don Francisco Gómez de Sandoval, 1st Duke of Lerma , a favourite of Philip III of Spain, was the first of the validos through whom the later Habsburg monarchs ruled. He was succeeded by Don Gaspar de Guzmán, Count-Duke of Olivares.-Biography:The family of Sandoval was ancient and powerful...
, a favourite in the court of Philip III
Philip III of Spain
Philip III , also known as Philip the Pious, was the King of Spain and King of Portugal and the Algarves, where he ruled as Philip II , from 1598 until his death...
. He was made a cardinal in August 1611 by Pope Paul V
Pope Paul V
-Theology:Paul met with Galileo Galilei in 1616 after Cardinal Bellarmine had, on his orders, warned Galileo not to hold or defend the heliocentric ideas of Copernicus. Whether there was also an order not to teach those ideas in any way has been a matter for controversy...
, as cardinal priest of Santa Susanna
Santa Susanna
The Church of Saint Susanna at the baths of Diocletian is a Roman Catholic parish church on the Quirinal Hill in Rome, with a titulus associated to its site that dates back to about 280...
, and stayed in Rome to exercise his office. He was indignant when the minor nobleman Cardinal Gabriel Trejo Paniagua
Gabriel Trejo Paniagua
Gabriel Trejo Paniagua was a Spanish cardinal, bishop and rector of the University of Salamanca.-Life:...
was chosen as Spain's crown-cardinal
Crown-cardinal
A crown-cardinal was a cardinal protector of a Catholic nation, nominated or funded by a Catholic monarch to serve as their representative within the College of Cardinals and, if applicable, exercise the jus exclusivae...
instead of him and, when Trejo lost political influence after his patron's fall, Borja played an even greater part in the Roman Curia
Roman Curia
The Roman Curia is the administrative apparatus of the Holy See and the central governing body of the entire Catholic Church, together with the Pope...
. He supported the crown-cardinal Antonio Zapata y Cisneros
Antonio Zapata y Cisneros
Antonio Zapata y Cisneros was a Spanish bishop, archbishop and cardinal-priest of Santa Croce in Gerusalemme, as well as councillor to Philip III of Spain, viceroy of Naples and inquisitor general of Spain...
, served a first term as Spain's ambassador to the Holy See
Holy See
The Holy See is the episcopal jurisdiction of the Catholic Church in Rome, in which its Bishop is commonly known as the Pope. It is the preeminent episcopal see of the Catholic Church, forming the central government of the Church. As such, diplomatically, and in other spheres the Holy See acts and...
(1616–19), participated in the Holy Office
Congregation for the Doctrine of the Faith
The Congregation for the Doctrine of the Faith , previously known as the Supreme Sacred Congregation of the Roman and Universal Inquisition , and after 1904 called the Supreme...
, attended the papal conclave
Papal conclave
A papal conclave is a meeting of the College of Cardinals convened to elect a Bishop of Rome, who then becomes the Pope during a period of vacancy in the papal office. The Pope is considered by Roman Catholics to be the apostolic successor of Saint Peter and earthly head of the Roman Catholic Church...
s in 1621
Papal conclave, 1621
Papal conclave 1621 – convoked after the death of Pope Paul V, elected Cardinal Alessandro Ludovisi, who under the name of Gregory XV became 234th Pope of the Catholic Church. It was the shortest conclave in the seventeenth century.-List of participants:Pope Paul V died on January 28, 1621 in the...
and 1623
Papal conclave, 1623
The papal conclave of 1623 was the papal conclave of Cardinals called on the death of Pope Gregory XV. It lasted eighteen days from 19 July 1623 to 6 August 1623 and chose Maffeo Barberini, who took office as Pope Urban VIII.- History :...
, and held the posts of Camerlengo
Camerlengo of the Sacred College of Cardinals
The Camerlengo of the Sacred College of Cardinals was the treasurer of that body.He administered all property, fees, funds and revenue belonging to the College of Cardinals, celebrated the requiem Mass for a deceased cardinal and was charged with the registry of the Acta Consistoralia.It is...
(1627–28) and Bishop of Albano (1630–1645).

From 1631 to 1634 he was once again Spain's ambassador to the Holy See
Holy See
The Holy See is the episcopal jurisdiction of the Catholic Church in Rome, in which its Bishop is commonly known as the Pope. It is the preeminent episcopal see of the Catholic Church, forming the central government of the Church. As such, diplomatically, and in other spheres the Holy See acts and...
and, on orders from the Spanish king, accused Pope Urban VIII
Pope Urban VIII
Pope Urban VIII , born Maffeo Barberini, was pope from 1623 to 1644. He was the last pope to expand the papal territory by force of arms, and was a prominent patron of the arts and reformer of Church missions...
(then maintaining neutrality or favouring France) in the consistory
Consistory
-Antiquity:Originally, the Latin word consistorium meant simply 'sitting together', just as the Greek synedrion ....
of 8 March 1632 of failing to defend Catholicism in its Thirty Years War with the Protestant nations and threatened that Spain would depose him. Part of the grounds for Spain's complaint lay in unfounded rumours of the pope siding with the Protestant Gustavus Adolphus of Sweden
Gustavus Adolphus of Sweden
Gustav II Adolf has been widely known in English by his Latinized name Gustavus Adolphus Magnus and variously in historical writings also as Gustavus, or Gustavus the Great, or Gustav Adolph the Great,...
(a heretic in the church's eyes). In response the pope changed his policy somewhat and made a contribution to the Spanish exchequer, which was then running out of money to finance the war. However, Borja's approach to the pope had lacked diplomacy and in retaliation Urban forced him out of Rome in 1634 and had Spain dismiss him as their ambassador.

Borja then returned to the Archdiocese of Seville, of which he was already archbishop. The patent enmity between Urban VIII and Cardinal Borja showed itself when Urban refused Philip IV
Philip IV of Spain
Philip IV was King of Spain between 1621 and 1665, sovereign of the Spanish Netherlands, and King of Portugal until 1640...
's proposal of Borja for Archbishop of Toledo, though he received the post from Urban's successor Pope Innocent X
Pope Innocent X
Pope Innocent X , born Giovanni Battista Pamphilj , was Pope from 1644 to 1655. Born in Rome of a family from Gubbio in Umbria who had come to Rome during the pontificate of Pope Innocent IX, he graduated from the Collegio Romano and followed a conventional cursus honorum, following his uncle...
in 1645, shortly before Borja's death in Toledo
Toledo, Spain
Toledo's Alcázar became renowned in the 19th and 20th centuries as a military academy. At the outbreak of the Spanish Civil War in 1936 its garrison was famously besieged by Republican forces.-Economy:...
later that year.