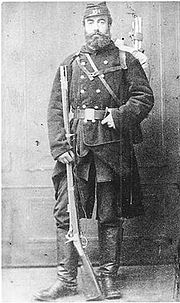 During the crises that led up to the Franco-Prussian War
Franco-Prussian War
The Franco-Prussian War or Franco-German War, often referred to in France as the 1870 War was a conflict between the Second French Empire and the Kingdom of Prussia. Prussia was aided by the North German Confederation, of which it was a member, and the South German states of Baden, Württemberg and...
, Adolphe Niel
Adolphe Niel
Adolphe Niel was a French Army general and statesman, also Marshal of France.He was born at Muret, Haute-Garonne and entered the École Polytechnique in 1821. Niel entered the engineer school at Metz, became lieutenant in the Engineers Corps in 1827, and captain in 1833...
, Minister of War for France
France
The French Republic , The French Republic , The French Republic , (commonly known as France , is a unitary semi-presidential republic in Western Europe with several overseas territories and islands located on other continents and in the Indian, Pacific, and Atlantic oceans. Metropolitan France...
under Louis-Napoleon attempted to bolster French military might by bringing into existence a service which would provide reserves to be added to the French army. Although there was conscription into the army, not only was it not universal, but middle-class people could purchase exemptions for their sons. The garde mobile (also called garde nationale mobile though it had nothing to do with the garde nationale or National Guard of France) was intended to be the body which would in effect conscript all who had been able to avoid military service. It would also take in all conscripts on completion of their army service. Napoleon III took up the idea and announced on 12 December 1866 that the Garde Mobile would eventually attain a strength of 400,000 troops.

Both the left and the right in the Corps Legislatif
Corps législatif
The Corps législatif was a part of the French legislature during the French Revolution and beyond. It is also the generic French term used to refer to any legislative body.-History:The Constitution of the Year I foresaw the need for a corps législatif...
took issue with the proposal. The right wanted an all-professional army; the left were opposed to Bonapartist militarism, or wanted a "People in Arms" as their defense service. Hence not much money was spent for the equipment or training of the Garde Mobile. Its authority to conscript was also diminished. Servicemen were trained fourteen days per year, each one not followed by another, so they could return home to sleep. This service was not even permitted to deploy beyond the local areas of which the units were formed; thus, they were hardly mobile.

The Garde Mobile had different uniforms from those of either the regular infantry, the National Guard, or the infantry of the French Marines. They did not get the excellent French chassepot
Chassepot
The Chassepot, officially known as Fusil modèle 1866, was a bolt action military breechloading rifle, famous as the arm of the French forces in the Franco-Prussian War of 1870 and 1871. It replaced an assortment of Minie muzzleloading rifles many of which were converted in 1867 to breech loading...
rifle. When the Franco-Prussian War broke out, troops were called up into the Garde Mobile, and they received a hodgepodge of inferior equipment bought from foreign countries, the transport of which was secured by the French Navy.
The source of this article is wikipedia, the free encyclopedia.  The text of this article is licensed under the GFDL.