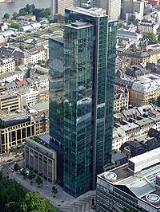 Encyclopedia
Gallileo is a 446ft tall skyscraper in Frankfurt, Germany
Germany
Germany , officially the Federal Republic of Germany , is a federal parliamentary republic in Europe. The country consists of 16 states while the capital and largest city is Berlin. Germany covers an area of 357,021 km2 and has a largely temperate seasonal climate...
. It was constructed from 1999 to 2003 and has 38 floors. It has 49,000 m² of floor space and is the 14th tallest skyscraper in Frankfurt. Its name is an intentional misspelling of the scientist Galileo's name; the extra l comes from the building's other namesake, the nearby park Gallusanlage. Along with the nearby Silver Tower
Silver Tower
Silver Tower is a 166 metre high-rise in Frankfurt, Germany built by Bilfinger Berger between 1975 and 1978...
, it served as the corporate headquarters of Dresdner Bank
Dresdner Bank
Dresdner Bank AG was one of Germany's largest banking corporations and was based in Frankfurt. It was acquired by competitor Commerzbank in December 2009.- 19th century :...
since 2008. A year later, after the takeover of Dresdner Bank by Commerzbank
Commerzbank
Commerzbank AG is the second-largest bank in Germany, after Deutsche Bank, headquartered in Frankfurt am Main.-Activities:Commerzbank is mainly active in commercial bank, retail banking and mortgaging. It suffered reversals in investment banking in early 2000s and scaled back its Securities unit...
, the new owner plans to use only the Gallileo.

It has a glass facade with 400 individual windows forming an approximately 22,000 square metres large transparent outer skin. In the glass floors were the American artist James Turrell, integrated lighting, which make the building at night from the inside out "glowing". These are not architecturally visible. The undersides of the floor slabs serve as reflective surfaces.

The building is structurally two towers linked by a central core that connects them. The north tower is 130 metres, the south tower is 114 metres, and the core is the building's full height.