Not to be confused with Quintus Lutatius Catulus
Quintus Lutatius Catulus
Quintus Lutatius Catulus was consul of the Roman Republic in 102 BC, and the leading public figure of the gens Lutatia of the time. His colleague in the consulship was Gaius Marius, but the two feuded and Catulus sided with Sulla in the civil war of 88–87 BC...
, the consul of 102 BC, or the poet Gaius Valerius Catullus
Catullus
Gaius Valerius Catullus was a Latin poet of the Republican period. His surviving works are still read widely, and continue to influence poetry and other forms of art.-Biography:...
. See Lutatius
Lutatius
Lutatius was the name of an ancient Roman family . They rose into prominence during the First Punic War and produced several consuls during the subsequent generations, but were not one of the gentes maiores. The Lutatii were noble plebeians....
for other members of the gens
Gens
In ancient Rome, a gens , plural gentes, referred to a family, consisting of all those individuals who shared the same nomen and claimed descent from a common ancestor. A branch of a gens was called a stirps . The gens was an important social structure at Rome and throughout Italy during the...
. For the genus of fungi, see Catulus (fungus). 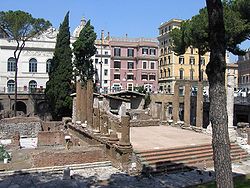 Gaius Lutatius Catulus (Latin
Latin
Latin is an Italic language originally spoken in Latium and Ancient Rome. It, along with most European languages, is a descendant of the ancient Proto-Indo-European language. Although it is considered a dead language, a number of scholars and members of the Christian clergy speak it fluently, and...
: C·LVTATIVS·C·F·CATVLVS) was a Roman
Ancient Rome
Ancient Rome was a thriving civilization that grew on the Italian Peninsula as early as the 8th century BC. Located along the Mediterranean Sea and centered on the city of Rome, it expanded to one of the largest empires in the ancient world....
statesman and naval commander
Commander
Commander is a naval rank which is also sometimes used as a military title depending on the individual customs of a given military service. Commander is also used as a rank or title in some organizations outside of the armed forces, particularly in police and law enforcement.-Commander as a naval...
in the First Punic War
First Punic War
The First Punic War was the first of three wars fought between Ancient Carthage and the Roman Republic. For 23 years, the two powers struggled for supremacy in the western Mediterranean Sea, primarily on the Mediterranean island of Sicily and its surrounding waters but also to a lesser extent in...
.

He was elected as a consul
Consul
Consul was the highest elected office of the Roman Republic and an appointive office under the Empire. The title was also used in other city states and also revived in modern states, notably in the First French Republic...
in 242 BC
242 BC
Year 242 BC was a year of the pre-Julian Roman calendar. At the time it was known as the Year of the Consulship of Catulus and Albinus...
, a novus homo
Novus homo
Homo novus was the term in ancient Rome for a man who was the first in his family to serve in the Roman Senate or, more specifically, to be elected as consul...
. During his consulship he supervised the construction of a new Roman fleet. This fleet was funded by donations from wealthy citizens, since the public treasury was virtually empty. He then led the fleet into victory over Hanno the Great
Hanno the Great
There were three leaders of ancient Carthage who were known as Hanno the Great, according to two historians . These figures they call for convenience: Hanno I the Great, Hanno II the Great, and Hanno III the Great...
's Carthaginian
Carthage
Carthage , implying it was a 'new Tyre') is a major urban centre that has existed for nearly 3,000 years on the Gulf of Tunis, developing from a Phoenician colony of the 1st millennium BC...
fleet in the Battle of the Aegates Islands
Battle of the Aegates Islands
The Battle of the Aegates Islands or Aegusa was the final naval battle fought between the fleets of Carthage and the Roman Republic during the First Punic War...
. This was the decisive battle of the First Punic War
First Punic War
The First Punic War was the first of three wars fought between Ancient Carthage and the Roman Republic. For 23 years, the two powers struggled for supremacy in the western Mediterranean Sea, primarily on the Mediterranean island of Sicily and its surrounding waters but also to a lesser extent in...
. To celebrate his victory, he built a temple to Juturna
Juturna
In the myth and religion of ancient Rome, Juturna was a goddess of fountains, wells and springs. She was a sister of Turnus and supported him against Aeneas by giving him his sword after he dropped it in battle, as well as taking him away from the battle when it seemed he would get killed...
in Campus Martius
Campus Martius
The Campus Martius , was a publicly owned area of ancient Rome about in extent. In the Middle Ages, it was the most populous area of Rome...
, in the area currently known as Largo di Torre Argentina
Largo di Torre Argentina
Largo di Torre Argentina is a square in Rome, Italy, that hosts four Republican Roman temples, and the remains of Pompey's Theatre. It is located in the ancient Campus Martius....
.

His brother, Quintus Lutatius Cerco, was a consul in the following year and a censor
Censor (ancient Rome)
The censor was an officer in ancient Rome who was responsible for maintaining the census, supervising public morality, and overseeing certain aspects of the government's finances....
in 236 BC
236 BC
Year 236 BC was a year of the pre-Julian Roman calendar. At the time it was known as the Year of the Consulship of Caudinus and Varus...
.