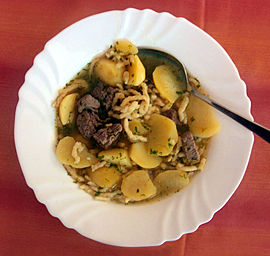 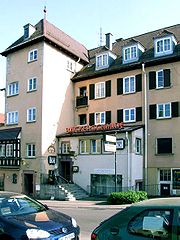 Gaisburger Marsch is a traditional Swabia
Swabia
Swabia is a cultural, historic and linguistic region in southwestern Germany.-Geography:Like many cultural regions of Europe, Swabia's borders are not clearly defined...
n beef stew
Stew
A stew is a combination of solid food ingredients that have been cooked in liquid and served in the resultant gravy. Ingredients in a stew can include any combination of vegetables , meat, especially tougher meats suitable for slow-cooking, such as beef. Poultry, sausages, and seafood are also used...
, named after Gaisburg, a district of Stuttgart
Stuttgart
Stuttgart is the capital of the state of Baden-Württemberg in southern Germany. The sixth-largest city in Germany, Stuttgart has a population of 600,038 while the metropolitan area has a population of 5.3 million ....
.

The meat, cooked in a strong beef broth
Broth
Broth is a liquid food preparation, typically consisting of either water or an already flavored stock, in which bones, meat, fish, cereal grains, or vegetables have been simmered. Broth is used as a basis for other edible liquids such as soup, gravy, or sauce. It can be eaten alone or with garnish...
, is cut into cubes and served with cooked potatoes and Spätzle
Spätzle
Spätzle are a type of egg noodle of soft texture found in the cuisine of Germany and of Austria, Switzerland, Hungary, Alsace and South Tyrol.-History:The geographic origin of spätzle is not precisely...
. The broth is poured over the dish before topping with golden-brown onions fried in butter.

One explanation for the name Gaisburger Marsch is that the dish was so popular in the 19th century among officer candidates that they marched all the way to Gaisburg where their favorite dish was served in the restaurant called Bäckerschmide.
Another version claims that locals from Gaisburg became prisoners of war and their women were only allowed to bring them one meal every day, so they created this nourishing dish and marched with it to the camp.
The district of Gaisburg (today part Stuttgart Ost) hosts annual celebrations with a festival lasting several days.

Gaisburger Marsch is the favourite food of ex-Bundespräsident Horst Köhler
Horst Köhler
Horst Köhler is a German politician of the Christian Democratic Union. He was President of Germany from 2004 to 2010. As the candidate of the two Christian Democratic sister parties, the CDU and the CSU, and the liberal FDP, Köhler was elected to his first five-year term by the Federal Assembly on...
, Wolfgang Schneiderhan
Wolfgang Schneiderhan (General)
Wolfgang Schneiderhan is a German general who served as Chief of Staff of the Bundeswehr, the German armed forces, from 2002 to 2009.-Military career:...
and Chef Harald Wohlfahrt
Harald Wohlfahrt
Harald Wohlfahrt is a German chef. In 2005 he was awarded the Bundesverdienstkreuz.He is often rated as the best German chef and amongst the finest in Europe....
.
The source of this article is wikipedia, the free encyclopedia.  The text of this article is licensed under the GFDL.