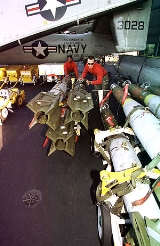 
The GBU-16 Paveway II is an American
United States
The United States of America is a federal constitutional republic comprising fifty states and a federal district...
Paveway
Paveway
Paveway is a generic term for Laser Guided Bombs .Pave or PAVE is sometimes used as an acronym for precision avionics vectoring equipment; literally, electronics for controlling the speed and direction of aircraft...
-series laser-guided bomb
Laser-guided bomb
A laser-guided bomb is a guided bomb that uses semi-active laser homing to strike a designated target with greater accuracy than an unguided bomb. LGBs are one of the most common and widespread guided bombs, used by a large number of the world's air forces.- Overview :Laser-guided munitions use a...
, based on the Mk 83
Mark 83 bomb
The Mark 83 is part of the Mark 80 series of low-drag general-purpose bombs in United States service.-Development & deployment:The nominal weight of the bomb is 1,000 lb , although its actual weight varies between 985 lb and 1,030 lb , depending on fuze options, and fin configuration...
general-purpose bomb
General-purpose bomb
A general-purpose bomb is an air-dropped bomb intended as a compromise between blast damage, penetration, and fragmentation in explosive effect.-Characteristics:...
, but with laser seeker and wings for guidance. It was introduced into service around 1976. It is used by USAF, US Navy, US Marine Corps, and various NATO air forces. It uses a 1,000 pound general purpose warhead. The bomb in the GBU-16 Paveway II is a 1,000 pound Mk 83 bomb.

GBU-16 bombs (along with the balance of the PAVEWAY series) are produced by defence giants Lockheed Martin
Lockheed Martin
Lockheed Martin is an American global aerospace, defense, security, and advanced technology company with worldwide interests. It was formed by the merger of Lockheed Corporation with Martin Marietta in March 1995. It is headquartered in Bethesda, Maryland, in the Washington Metropolitan Area....
and Raytheon
Raytheon
Raytheon Company is a major American defense contractor and industrial corporation with core manufacturing concentrations in weapons and military and commercial electronics. It was previously involved in corporate and special-mission aircraft until early 2007...
. Raytheon began production after purchasing the product line from Texas Instruments
Texas Instruments
Texas Instruments Inc. , widely known as TI, is an American company based in Dallas, Texas, United States, which develops and commercializes semiconductor and computer technology...
. Lockheed Martin was awarded a contract to compete with Raytheon when there was a break in production caused by transferring manufacturing out of Texas.

Laser Guided Bombs are often labeled as "smart bomb
Smart bomb
Smart bomb has several meanings:* In weapons, a smart bomb is a precision-guided munition* Smart Bomb Interactive, a video game development studio based in Salt Lake City, Utah...
s", despite requiring external input in the form of laser designation of the intended target. According to Raytheon's fact sheet for the PAVEWAY 2, 99 deliveries of guided munitions will yield a circular error probable
Circular error probable
In the military science of ballistics, circular error probable is an intuitive measure of a weapon system's precision...
(CEP) of only 3.6 feet, versus a CEP of 310 feet for 99 unguided bombs dropped under similar conditions.