Encyclopedia
Günter Behnisch was a German
Germany
Germany , officially the Federal Republic of Germany , is a federal parliamentary republic in Europe. The country consists of 16 states while the capital and largest city is Berlin. Germany covers an area of 357,021 km2 and has a largely temperate seasonal climate...
architect
Architect
An architect is a person trained in the planning, design and oversight of the construction of buildings. To practice architecture means to offer or render services in connection with the design and construction of a building, or group of buildings and the space within the site surrounding the...
, born in Lockwitz, near Dresden
Dresden
Dresden is the capital city of the Free State of Saxony in Germany. It is situated in a valley on the River Elbe, near the Czech border. The Dresden conurbation is part of the Saxon Triangle metropolitan area....
. He was one of the most prominent architects representing deconstructivism
Deconstructivism
Deconstructivism is a development of postmodern architecture that began in the late 1980s. It is characterized by ideas of fragmentation, an interest in manipulating ideas of a structure's surface or skin, non-rectilinear shapes which serve to distort and dislocate some of the elements of...
.

Günter Behnisch studied architecture at the Technical University in Stuttgart
University of Stuttgart
The University of Stuttgart is a university located in Stuttgart, Germany. It was founded in 1829 and is organized in 10 faculties....
. One of his most notable buildings was the new parliament in the West German capital, Bonn
Bonn
Bonn is the 19th largest city in Germany. Located in the Cologne/Bonn Region, about 25 kilometres south of Cologne on the river Rhine in the State of North Rhine-Westphalia, it was the capital of West Germany from 1949 to 1990 and the official seat of government of united Germany from 1990 to 1999....
. Although he won the architectural design competition in 1973, the construction only began in 1987, and was completed in 1992. 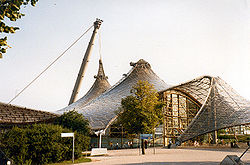