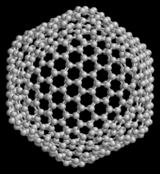 Overview
A fullerene is any molecule
Molecule
A molecule is an electrically neutral group of at least two atoms held together by covalent chemical bonds. Molecules are distinguished from ions by their electrical charge...
composed entirely of carbon
Carbon
Carbon is the chemical element with symbol C and atomic number 6. As a member of group 14 on the periodic table, it is nonmetallic and tetravalent—making four electrons available to form covalent chemical bonds...
, in the form of a hollow sphere
Sphere
A sphere is a perfectly round geometrical object in three-dimensional space, such as the shape of a round ball. Like a circle in two dimensions, a perfect sphere is completely symmetrical around its center, with all points on the surface lying the same distance r from the center point...
, ellipsoid, or tube
Cylinder (geometry)
A cylinder is one of the most basic curvilinear geometric shapes, the surface formed by the points at a fixed distance from a given line segment, the axis of the cylinder. The solid enclosed by this surface and by two planes perpendicular to the axis is also called a cylinder...
. Spherical fullerenes are also called buckyballs, and they resemble the balls used in association football. Cylindrical ones are called carbon nanotubes or buckytubes. Fullerenes are similar in structure to graphite
Graphite
The mineral graphite is one of the allotropes of carbon. It was named by Abraham Gottlob Werner in 1789 from the Ancient Greek γράφω , "to draw/write", for its use in pencils, where it is commonly called lead . Unlike diamond , graphite is an electrical conductor, a semimetal...
, which is composed of stacked graphene
Graphene
Graphene is an allotrope of carbon, whose structure is one-atom-thick planar sheets of sp2-bonded carbon atoms that are densely packed in a honeycomb crystal lattice. The term graphene was coined as a combination of graphite and the suffix -ene by Hanns-Peter Boehm, who described single-layer...
sheets of linked hexagonal rings; but they may also contain pentagonal (or sometimes heptagonal) rings.

The first fullerene to be discovered, and the family's namesake, buckminsterfullerene
Buckminsterfullerene
Buckminsterfullerene is a spherical fullerene molecule with the formula . It was first intentionally prepared in 1985 by Harold Kroto, James Heath, Sean O'Brien, Robert Curl and Richard Smalley at Rice University...
(C60), was prepared in 1985 by Richard Smalley
Richard Smalley
Richard Errett Smalley was the Gene and Norman Hackerman Professor of Chemistry and a Professor of Physics and Astronomy at Rice University, in Houston, Texas...
, Robert Curl
Robert Curl
Robert Floyd Curl, Jr. the son of a Methodist Minister is a graduate of Thomas Jefferson High School in San Antonio, Texas and is an emeritus professor of chemistry at Rice University....
, James Heath
James Heath
James Heath is a British film, commercial and music video director.In 2003 he formed Burning Vision Entertainment with fellow director Gratian Dimech. Their debut video was for the band Tommi and was the first UK music video to be shot on the Sony High Definition cameras used by George Lucas on...
, Sean O'Brien, and Harold Kroto
Harold Kroto
Sir Harold Walter Kroto, FRS , born Harold Walter Krotoschiner, is a British chemist and one of the three recipients to share the 1996 Nobel Prize in Chemistry with Robert Curl and Richard Smalley....
at Rice University
Rice University
William Marsh Rice University, commonly referred to as Rice University or Rice, is a private research university located on a heavily wooded campus in Houston, Texas, United States...
.

Why would fullerene be used in production of cosmetics such as eye-shadow, mascara, eyliner etc?

Why fullerene is different from other current topical antioxidants?

How be fullerene isolated in the mascara?

What is the antioxidation power of fullerene?

Fullerenes- Past and Future

Hello All Member, Is fullerene a class of carbon molecules? Please share your suggestion here. Thanks in Advance..
More
x