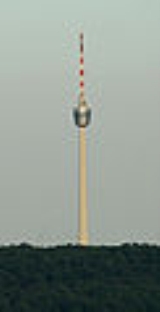 Born in Stuttgart
Stuttgart
Stuttgart is the capital of the state of Baden-Württemberg in southern Germany. The sixth-largest city in Germany, Stuttgart has a population of 600,038 while the metropolitan area has a population of 5.3 million ....
in 1909, Leonhardt studied at Stuttgart University and Purdue University
Purdue University
Purdue University, located in West Lafayette, Indiana, U.S., is the flagship university of the six-campus Purdue University system. Purdue was founded on May 6, 1869, as a land-grant university when the Indiana General Assembly, taking advantage of the Morrill Act, accepted a donation of land and...
. In 1934 he joined the German Highway Administration, working with Paul Bonatz
Paul Bonatz
Paul Bonatz was a German architect, member of the Stuttgart School and professor at the technical university in that city during part of World War II and from 1954 until his death....
amongst others. He was appointed at the remarkably young age of 28 as the Chief Engineer for the Cologne-Rodenkirchen Bridge
Cologne Rodenkirchen Bridge
The Cologne Rodenkirchen Bridge is a suspension bridge over the Rhine located in Cologne, Germany. Completed in 1954, it has a main span of 378 metres. It was named after the Cologne district of Rodenkirchen.-Planning and construction:...
.

Throughout his career, Leonhardt was as dedicated to research as to design, and his major contributions to bridge engineering technology included:

His major structures include the Cologne-Rodenkirchen Bridge
Cologne Rodenkirchen Bridge
The Cologne Rodenkirchen Bridge is a suspension bridge over the Rhine located in Cologne, Germany. Completed in 1954, it has a main span of 378 metres. It was named after the Cologne district of Rodenkirchen.-Planning and construction:...
, Stuttgart Television Tower, and various cable-stayed bridges in Düsseldorf
Düsseldorf
Düsseldorf is the capital city of the German state of North Rhine-Westphalia and centre of the Rhine-Ruhr metropolitan region.Düsseldorf is an important international business and financial centre and renowned for its fashion and trade fairs. Located centrally within the European Megalopolis, the...
.

He worked on the design of several cable-stayed bridges, including the Pasco-Kennewick bridge
Cable Bridge
The Cable Bridge, officially called the Ed Hendler Bridge and sometimes called the Intercity Bridge, spans the Columbia River between Pasco and Kennewick in southeastern Washington as State Route 397...
(1978) in the USA, and the Helgeland Bridge
Helgeland Bridge
Helgeland Bridge is a cable-stayed bridge that crosses Leirfjorden between the mainland and Alsten in Nordland county in Norway. It connects the town of Sandnessjøen to the mainland. The bridge is 1065 metres long, The main span is 425 metres, and the maximum clearance to the sea is 45 metres. The...
(1981) in Norway.