Encyclopedia
The Fresno Metropolitan Museum of Art and Science was a Smithsonian Institution Affiliate and American Association of Museums
American Association of Museums
The American Association of Museums is a non-profit association that has brought museums together since its founding in 1906, helping develop standards and best practices, gathering and sharing knowledge, and advocating on issues of concern to the museum community...
accredited museum located in downtown Fresno, California
Fresno, California
Fresno is a city in central California, United States, the county seat of Fresno County. As of the 2010 census, the city's population was 510,365, making it the fifth largest city in California, the largest inland city in California, and the 34th largest in the nation...
, in the San Joaquin Valley
San Joaquin Valley
The San Joaquin Valley is the area of the Central Valley of California that lies south of the Sacramento – San Joaquin River Delta in Stockton...
. The Museum was established in 1984 and was one of the largest museum between San Francisco and Los Angeles
Los Ángeles
Los Ángeles is the capital of the province of Biobío, in the commune of the same name, in Region VIII , in the center-south of Chile. It is located between the Laja and Biobío rivers. The population is 123,445 inhabitants...
. “The Met” was housed in the historic 1922 Fresno Bee Building.

In August 2005, the museum began an extensive interior renovation; the first of its kind since the Museum's opening. The renovation concluded and the museum reopened on November 13, 2008 and the museum later closed on January 5, 2010, due to the financial losses of the organization .

Since that time, the Museum has attracted more than 2 million people with its programs in art and science with diverse exhibitions including A T. rex Named Sue
Sue (dinosaur)
"Sue" is the nickname given to FMNH PR 2081, which is the largest, most extensive and best preserved Tyrannosaurus rex specimen ever found. It was discovered in the summer of 1990 by Sue Hendrickson, a paleontologist, and was named after her...
, Masterworks from the Albertina, Georgia O'Keeffe
Georgia O'Keeffe
Georgia Totto O'Keeffe was an American artist.Born near Sun Prairie, Wisconsin, O'Keeffe first came to the attention of the New York art community in 1916, several decades before women had gained access to art training in America’s colleges and universities, and before any of its women artists...
: Visions of the Sublime, Variations on a Theme: American Prints from Pop Art to Minimalism—A Selection from the Anderson Graphic Arts Collection and Grossology
Grossology
Grossology may refer to:* Grossology , a series of non-fictional children's books written by Sylvia Branzei* Grossology , a Canadian animated TV series...
: The (Impolite) Science of the Human Body.' '

In 1995, the Museum became the first organization outside the Bay Area to win Northern California
Northern California
Northern California is the northern portion of the U.S. state of California. The San Francisco Bay Area , and Sacramento as well as its metropolitan area are the main population centers...
's "Award for Excellence" in non-profit management from Chevron
Chevron Corporation
Chevron Corporation is an American multinational energy corporation headquartered in San Ramon, California, United States and active in more than 180 countries. It is engaged in every aspect of the oil, gas, and geothermal energy industries, including exploration and production; refining,...
and The Management Center of San Francisco. In 1995, the Met also received a Central California
Central California
Central California, sometimes referenced as Mid-State, is an area of California south of the San Francisco Bay Area and north of Southern California...
Excellence in Business Award in the non-profit category as presented by The Fresno Bee. The Museum has also been named the Best Museum each year since 1999 by the readers of The Fresno Bee. The Museum was granted American Association of Museums accreditation status in July 2007.

On January 5, 2010, the Museum closed due to the museum's inability to payoff the increasing deficit from the museum's renovation and operations.

The museum’s $28 million renovation project brought the historic 1922 Fresno Bee Building into the 21st century, with more accessible gallery space, new restroom facilities and elevators, and remodeled fourth and fifth floors, which previously had not been opened as gallery space. The building underwent significant structural enhancements, specifically on the west wall from the footings below the basement up to the fifth floor. The existing support columns consisting of steel reinforced concrete were enhanced in the basement and first floor. The building reopened November 13, 2008 .

The museum's fourth floor consisted of a large gallery space that also served as a forum for educational purposes and housed the Michaelis Classroom in an adjacent room . The fifth floor became the home for the museum's administrative offices and also housed a conference room and research library.

During the museum’s renovation, programming and exhibitions were held in a temporary location. The museum’s Reeves ASK Science Center moved into donated space in the fall of 2005 and was open until July 2008.

The Reeves Family ASK Science Center was a hands-on science education space that features rotating exhibits. Following the renovation the center returned to its location inside the museum, on the 1st floor of the Fresno Bee Building . 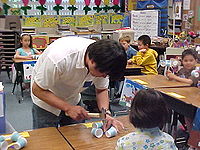 The Mobile Met Science Outreach program, which visited schools, YMCA
YMCA
The Young Men's Christian Association is a worldwide organization of more than 45 million members from 125 national federations affiliated through the World Alliance of YMCAs...
groups, day care facilities and summer school programs from Los Baños
Los Banos, California
Los Banos is a city in Merced County, California, near the junction of State Route 152 and Interstate 5. Los Banos is located southwest of Merced, at an elevation of 118 feet . The population was 35,972 at the 2010 census, up from 25,869 at the 2000 census...
to Visalia
Visalia, California
Visalia is a Central California city situated in the heart of California’s agricultural San Joaquin Valley, approximately southeast of San Francisco and north of Los Angeles...
and provided free hands-on science lessons inspired by the California Science Standards for children in kindergarten though sixth grade.

The Docent Outreach Project, which allowed teachers in grades 1 through 3 to take advantage of the Met’s programming without traveling to the museum. The program's lessons were one hour long and feature hands-on art instruction.

Visual Thinking Strategies (VTS), which used art to teach critical thinking, communication skills and visual literacy. These lessons were provided in English, Spanish and Hmong, free of charge to schools.

The Met on the Move program, which debuted on October 13, 2008, included its mobile outreach vehicle, the Met on the Move, which provided hands-on activities and lessons in Art and Science to elementary schools in and around the Central San Joaquin Valley. The Met on the Move was the latest addition to the City of Fresno's Department of Parks After School,
Recreation & Community Services Mobile Fleet .