His ancestors had been members of the community of the Bohemian Brethren, and had clandestinely maintained their Protestant belief throughout the period of religious persecution, eventually giving their adherence to the Augsburg confession
Augsburg Confession
The Augsburg Confession, also known as the "Augustana" from its Latin name, Confessio Augustana, is the primary confession of faith of the Lutheran Church and one of the most important documents of the Lutheran reformation...
as approximate to their original faith. Palacký's father was a schoolmaster and a man of some learning. The son was sent in 1812 to the Evangelic Lutheran Lyceum at Bratislava
Bratislava
Bratislava is the capital of Slovakia and, with a population of about 431,000, also the country's largest city. Bratislava is in southwestern Slovakia on both banks of the Danube River. Bordering Austria and Hungary, it is the only national capital that borders two independent countries.Bratislava...
, where he came in contact with the philologist Šafařík and became a zealous student of Slavonic languages (He mastered 11 languages and became familiar with a few others).

After some years spent in private teaching, Palacký settled in 1823 at Prague
Prague
Prague is the capital and largest city of the Czech Republic. Situated in the north-west of the country on the Vltava river, the city is home to about 1.3 million people, while its metropolitan area is estimated to have a population of over 2.3 million...
. Here he found a warm friend in Josef Dobrovský
Josef Dobrovský
Josef Dobrovský was a Bohemian philologist and historian, one of the most important figures of the Czech national revival.- Life & Work :...
, whose good relations with the Austrian authorities shielded him from the hostility shown by the government to students of Slav subjects. Dobrovský introduced him to Count Sternberg and his brother Francis, both of whom took an enthusiastic interest in Bohemian history. Count Francis was the principal founder of the Society of the Bohemian Museum, devoted to the collection of documents bearing on Bohemian history, with the object of reawakening national sentiment by the study of the national records.

Public interest in the movement was stimulated in 1825 by the new Journal of the Bohemian Museum (Časopis českého musea), of which Palacký was the first editor. The journal was at first published in Czech and German, and the Czech edition survived to become the most important literary organ of Bohemia. Palacký had received a modest appointment as archivist to Count Sternberg and in 1829 the Bohemian estates sought to confer on him the title of historiographer of Bohemia, with a small salary, but it was ten years before the consent of the Viennese authorities was obtained.

Meanwhile the estates, with the tardy assent of Vienna, had undertaken to pay the expenses of publishing Palacký's capital work, The History of the Czech Nation in Bohemia and Moravia (5 vols, 1836-1867). This book, which comes down to the year 1526 and the extinction of Czech independence (Palacký admitted that in writing about the national history since 1526, he "would have to lie"), was founded on laborious research in the local archives of Bohemia and in the libraries of the chief cities of Europe, and remains the standard authority. The first volume was printed in German in 1836, and subsequently translated into Czech. The publication of the work was hindered by the police-censorship, which was especially active in criticizing his account of the Hussite
Hussite
The Hussites were a Christian movement following the teachings of Czech reformer Jan Hus , who became one of the forerunners of the Protestant Reformation...
movement.

Palacký, though entirely national and Protestant in his sympathies, was careful to avoid an uncritical approbation of the Reformers' methods, but his statements were held by the authorities to be dangerous to the Catholic
Catholic
The word catholic comes from the Greek phrase , meaning "on the whole," "according to the whole" or "in general", and is a combination of the Greek words meaning "about" and meaning "whole"...
faith. He was compelled to cut out parts of his narrative and to accept as integral parts of his work passages interpolated by the censors. After the abolition of the police-censorship in 1848 he published a new edition, completed in 1876, restoring the original form of the work. The fairest and most considerable of Palacký's antagonists in the controversy aroused by his narrative of the early reformation in Bohemia was Baron Helfert, who received a brief from Vienna to write his Huss und Hieronymus (1853) to counteract the impression made by Palacký's History. K. A. K. Höfler, a German professor of history at Prague, edited the historical authorities for the period in a similar sense in his Geschichte der hussitischen Bewegung in Bohmen. Palacký replied in his Geschichte des Hussitenthumes und Professor Löffler (Prague, 1868) and Zur böhmischen Geschichtschreibung (Prague, 1871).

The Revolution of 1848 forced the historian into practical politics. He was deputed to the Reichstag which sat at Kroměříž (Kremsier) in the autumn of that year, and was a member of the Slav congress at Prague. He refused to take part in the preliminary parliament consisting of 500 former deputies to the diet, which met at Frankfurt
Frankfurt
Frankfurt am Main , commonly known simply as Frankfurt, is the largest city in the German state of Hesse and the fifth-largest city in Germany, with a 2010 population of 688,249. The urban area had an estimated population of 2,300,000 in 2010...
, on the grounds that as a Czech he had no interest in German affairs. He was at this time in favour of a strong Austrian empire, which should consist of a federation of the southern German and the Slav states, allowing the retention of their individual rights. This movement was called austroslavism
Austroslavism
Austroslavism was a political concept and program aimed to solve problems of Slavic peoples in the Austrian Empire.It was most influential among Czech liberals around the middle of the 19th century...
. Its views met with some degree of consideration at Vienna, and Palacký was even offered a portfolio in the Pillersdorf
Baron Franz von Pillersdorf
Baron Franz von Pillersdorf was an Austrian statesman.Born in Brno the son of a judge, Pillersdorf after a legal education in Vienna in 1805 started his public service career in Galicia. In 1807, he returned to Vienna as assistant to the court councilor Baron von Baldacci. This put him in the...
cabinet. The collapse of the federal idea and the definite triumph of the party of reaction in 1852 led to his retirement from politics.

After the liberal concessions of 1860 and 1861, however, he became a life member of the Austrian senate. His views met with small support from the assembly, and with the exception of a short period after the decree of September 1871, by which the emperor raised hopes for Bohemian self-government, he ceased to appear in the senate from 1861 onwards. In the Bohemian Landtag he became the acknowledged leader of the nationalist-federal party (staročeši). He sought the establishment of a Czech kingdom that should include Bohemia
Bohemia
Bohemia is a historical region in central Europe, occupying the western two-thirds of the traditional Czech Lands. It is located in the contemporary Czech Republic with its capital in Prague...
, Moravia
Moravia
Moravia is a historical region in Central Europe in the east of the Czech Republic, and one of the former Czech lands, together with Bohemia and Silesia. It takes its name from the Morava River which rises in the northwest of the region...
and Silesia
Czech Silesia
Czech Silesia is an unofficial name of one of the three Czech lands and a section of the Silesian historical region. It is located in the north-east of the Czech Republic, predominantly in the Moravian-Silesian Region, with a section in the northern Olomouc Region...
, and in his zeal for Czech autonomy he even entered into an alliance with the Conservative nobility and with the extreme Catholics. He attended the Panslavist congress at Moscow in 1867. He died at Prague on the 26 May 1876. 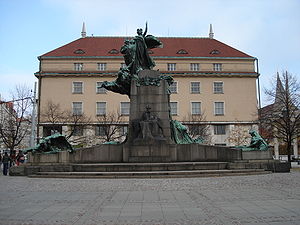 Among his more important smaller historical works are:

Palacký is considered as one of the three fathers of the nation
Pater Patriae
Pater Patriae , also seen as Parens Patriae, is a Latin honorific meaning "Father of the Country," or more literally, "Father of the Fatherland".- Roman history :...
- the first being the King of Bohemia and Holy Roman Emperor Charles IV
Charles IV, Holy Roman Emperor
Charles IV , born Wenceslaus , was the second king of Bohemia from the House of Luxembourg, and the first king of Bohemia to also become Holy Roman Emperor....
, the second is František Palacký and the third is Tomáš Garrigue Masaryk. Various individuals like to emphasize one over the other. As to historians, none have surpassed his history of Bohemia except when they have focused on a narrower time period. Even these have been directly or indirectly influenced by his work.