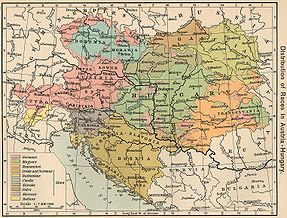 It was most influential among Czech
Czech people
Czechs, or Czech people are a western Slavic people of Central Europe, living predominantly in the Czech Republic. Small populations of Czechs also live in Slovakia, Austria, the United States, the United Kingdom, Chile, Argentina, Canada, Germany, Russia and other countries...
liberals
Liberalism
Liberalism is the belief in the importance of liberty and equal rights. Liberals espouse a wide array of views depending on their understanding of these principles, but generally, liberals support ideas such as constitutionalism, liberal democracy, free and fair elections, human rights,...
around the middle of the 19th century. First proposed by Karel Havlíček Borovský
Karel Havlícek Borovský
Karel Havlíček Borovský was a Czech writer, poet, critic, politician, journalist, and publisher. He lived and studied at the Gymnasium in Německý Brod , and his house on the main square is today the Havlíček Museum...
in 1846, as an opposition to the concept of pan-Slavism
Pan-Slavism
Pan-Slavism was a movement in the mid-19th century aimed at unity of all the Slavic peoples. The main focus was in the Balkans where the South Slavs had been ruled for centuries by other empires, Byzantine Empire, Austria-Hungary, the Ottoman Empire, and Venice...
, it was further developed into a complete political program by Czech politician František Palacký
František Palacký
František Palacký was a Czech historian and politician.-Biography:...
. Austroslavism also found some support in other Slavic nations in the Austrian Empire, especially the Slovenes and Croats
Croats
Croats are a South Slavic ethnic group mostly living in Croatia, Bosnia and Herzegovina and nearby countries. There are around 4 million Croats living inside Croatia and up to 4.5 million throughout the rest of the world. Responding to political, social and economic pressure, many Croats have...
.

Austroslavism envisioned peaceful cooperation of the smaller Slavic nations of Central Europe
Central Europe
Central Europe or alternatively Middle Europe is a region of the European continent lying between the variously defined areas of Eastern and Western Europe...
within the Habsburg Monarchy
Habsburg Monarchy
The Habsburg Monarchy covered the territories ruled by the junior Austrian branch of the House of Habsburg , and then by the successor House of Habsburg-Lorraine , between 1526 and 1867/1918. The Imperial capital was Vienna, except from 1583 to 1611, when it was moved to Prague...
not dominated by German
German language
German is a West Germanic language, related to and classified alongside English and Dutch. With an estimated 90 – 98 million native speakers, German is one of the world's major languages and is the most widely-spoken first language in the European Union....
-speaking elites. Palacký proposed a federation of 8 national regions, with significant self-governance. After the suppression of the Czech revolution in Prague
Prague
Prague is the capital and largest city of the Czech Republic. Situated in the north-west of the country on the Vltava river, the city is home to about 1.3 million people, while its metropolitan area is estimated to have a population of over 2.3 million...
in June 1848, the program became irrelevant. The Austrian Empire transformed into Austria-Hungary
Austria-Hungary
Austria-Hungary , more formally known as the Kingdoms and Lands Represented in the Imperial Council and the Lands of the Holy Hungarian Crown of Saint Stephen, was a constitutional monarchic union between the crowns of the Austrian Empire and the Kingdom of Hungary in...
(1867), honouring Hungarian
Hungary
Hungary , officially the Republic of Hungary , is a landlocked country in Central Europe. It is situated in the Carpathian Basin and is bordered by Slovakia to the north, Ukraine and Romania to the east, Serbia and Croatia to the south, Slovenia to the southwest and Austria to the west. The...
, but not Slavic demands as part of the Ausgleich
Ausgleich
The Austro-Hungarian Compromise of 1867 established the dual monarchy of Austria-Hungary. The Compromise re-established the sovereignty of the Kingdom of Hungary, separate from and no longer subject to the Austrian Empire...
. This further weakened the position of Austroslavism.