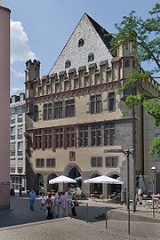 Encyclopedia
The Frankfurt Art Association (Frankfurter Kunstverein) is an art museum founded in 1829 by a group of influential citizen of the city of Frankfurt
Frankfurt
Frankfurt am Main , commonly known simply as Frankfurt, is the largest city in the German state of Hesse and the fifth-largest city in Germany, with a 2010 population of 688,249. The urban area had an estimated population of 2,300,000 in 2010...
, Germany
Germany
Germany , officially the Federal Republic of Germany , is a federal parliamentary republic in Europe. The country consists of 16 states while the capital and largest city is Berlin. Germany covers an area of 357,021 km2 and has a largely temperate seasonal climate...
. The aim of the institution is to support the arts in the city, which was an important center of trade and business. Works of art were bought and exhibitions organized in order to open an access to art and culture for the public.

Among the founders were Johann Gerhard Christian Thomas, a senator and later mayor of the city, historian Johann Friedrich Böhmer
Johann Friedrich Böhmer
Johann Friedrich Böhmer was a German historian. His historical work was chiefly concerned with collecting and tabulating charters and other imperial documents of the Middle Ages.-Biography:...
, and art historian Johann David Passavant
Johann David Passavant
Johann David Passavant was a German painter, curator and artist.Passavant was born in 1787 in Frankfurt am Main, Germany. His interest in the arts was evidence by an early correspondence with the artist Franz Pforr . He moved to Paris in 1809 to further his business interests...
. Soon after the establishment of the museum, many important and influential citizens and artists became members.

Today, the museum is situated in the center of Frankfurt, in a gothic building from 1464 called the Steinernes Haus ('Stone Building'), near the city's town hall. There are around 1,700 members who support the activities and enable the museum to reach its aim today, more than 150 years after its establishment. Although the museum has no permanent collection, as art is not purchased any more, its exhibitions of contemporary art are internationally renowned. Furthermore, guided tours, symposia, film programs, and excursions are organized. So even in the neighbourhood of important museums, such as the Museum of Modern Art
Museum für Moderne Kunst
The Museum für Moderne Kunst in Frankfurt am Main was founded in 1981. The museum was designed by the Viennese architect Hans Hollein. Because of its triangular shape, it is called "piece of cake"....
(Museum für Moderne Kunst) and Schirn Gallery (Schirn Kunsthalle), the museum manages to assert itself as an important meeting point not only for Frankfurt's art scene. Especially young artists of the state-run art school (Städelschule ) and the well-known design school HFG are closely connected with the museum and cooperation is common.