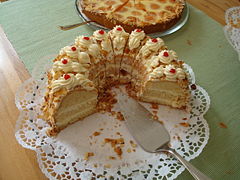 The Frankfurter Kranz is a cake speciality believed to originate from Frankfurt am Main, Germany
Germany
Germany , officially the Federal Republic of Germany , is a federal parliamentary republic in Europe. The country consists of 16 states while the capital and largest city is Berlin. Germany covers an area of 357,021 km2 and has a largely temperate seasonal climate...
.

Preparation starts with the baking of a firm sponge cake in a ring shaped baking tin. The cake is then sliced horizontally to divide it into two or three rings, and thick layers of butter-cream icing are placed between the rings, usually with a layer of red jam (typically strawberry
Strawberry Jam
Strawberry Jam is the seventh studio album by American indie rock band Animal Collective. It was released in September 2007, the band's first on Domino Records. The title and track listing were revealed by band member Geologist on the Collected Animals message board on May 16, 2007...
, blackcurrant
Blackcurrant
Blackcurrant, Ribes nigrum, is a species of Ribes berry native to central and northern Europe and northern Asia, and is a perennial....
or cherry
Cherry
The cherry is the fruit of many plants of the genus Prunus, and is a fleshy stone fruit. The cherry fruits of commerce are usually obtained from a limited number of species, including especially cultivars of the wild cherry, Prunus avium....
jam). The outside of the cake is then thickly coated with more buttercream and topped with caramel-covered brittle
Brittle (food)
Brittle is a type of confection, consisting of flat broken pieces of hard sugar candy embedded with nuts such as pecans, almonds, or peanuts....
nuts, called Krokant, toasted almond
Almond
The almond , is a species of tree native to the Middle East and South Asia. Almond is also the name of the edible and widely cultivated seed of this tree...
flakes and/or ground hazelnuts
Hazelnut
A hazelnut is the nut of the hazel and is also known as a cob nut or filbert nut according to species. A cob is roughly spherical to oval, about 15–25 mm long and 10–15 mm in diameter, with an outer fibrous husk surrounding a smooth shell. A filbert is more elongated, being about twice...
.

After world war 2, in the absence of butter, the surface of the cake was often coated with Kogel mogel (sweetened egg yolk paste)
Kogel mogel
A Kogel mogel, Gogl-Mogl, Gogel-Mogel or Gogle-mogle is an egg-based homemade dessert popular in Eastern Europe made from egg yolks, sugar, and flavourings such as honey, cocoa or rum. In its classic form it is served slightly chilled or at room temperature. Served warm, it is considered a home...
, and other types of decoration may involve dots made from (more) buttercream or cocktail cherries
Maraschino cherry
A maraschino cherry is a preserved, sweetened cherry, typically made from light-colored sweet cherries such as the Royal Ann, Rainier, or Gold varieties...
.
The source of this article is wikipedia, the free encyclopedia.  The text of this article is licensed under the GFDL.