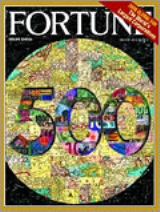 The Fortune 500 is an annual list compiled and published by Fortune
Fortune (magazine)
Fortune is a global business magazine published by Time Inc. Founded by Henry Luce in 1930, the publishing business, consisting of Time, Life, Fortune, and Sports Illustrated, grew to become Time Warner. In turn, AOL grew as it acquired Time Warner in 2000 when Time Warner was the world's largest...
magazine that ranks the top 500 U.S.
United States
The United States of America is a federal constitutional republic comprising fifty states and a federal district...
closely held and public corporations as ranked by their gross revenue after adjustments made by Fortune to exclude the impact of excise taxes companies collect. The list includes publicly and privately-held companies for which revenues are publicly available. The first Fortune 500 list was published in 1955.

Although the Fortune 500 list is the most familiar one, similar gross revenue lists of the top firms range from the highest ranking Fortune 100 including the top one hundred to the broader ranking Fortune 1000
Fortune 1000
Fortune 1000 is a reference to a list maintained by the American business magazine Fortune. The list is of the 1000 largest American companies, ranked on revenues alone...
that includes the top thousand firms. While the membership on the smaller lists are somewhat stable, the ranking on the lists may change over time, depending upon revenues and often, because of mergers among firms already listed.

The concept of the Fortune 500 was created by Edgar P. Smith, a Fortune Editor.