Fort Carson was established in 1942, following Japan's attack on Pearl Harbor
Pearl Harbor
Pearl Harbor, known to Hawaiians as Puuloa, is a lagoon harbor on the island of Oahu, Hawaii, west of Honolulu. Much of the harbor and surrounding lands is a United States Navy deep-water naval base. It is also the headquarters of the U.S. Pacific Fleet...
. The city of Colorado Springs, Colorado
Colorado Springs, Colorado
Colorado Springs is a Home Rule Municipality that is the county seat and most populous city of El Paso County, Colorado, United States. Colorado Springs is located in South-Central Colorado, in the southern portion of the state. It is situated on Fountain Creek and is located south of the Colorado...
purchased land south of the city and donated it to the War Department. Construction began immediately and the first building, the camp headquarters, was completed January 31, 1942. Camp Carson was named in honor of the legendary Army scout, General Christopher "Kit" Carson, who explored much of the West in the 1800s.

At the construction's peak, nearly 11,500 workers were employed on various construction projects at the new camp. Facilities were provided for 35,173 enlisted men, 1,818 officers and 592 nurses. Nearly all of the buildings were of mobilization type construction, with wood sided exteriors. The hospital complex was constructed of concrete block, and considered to be semi-permanent, and had space for 1,726 beds, expandable to 2,000 beds. The 89th Infantry Division was the first major unit to be activated at Camp Carson. During World War II, over 100,000 soldiers trained at Camp Carson. Along with three other infantry divisions – the 71st Infantry Division, 104th Infantry Division and 10th Mountain Division–more than 125 units were activated at Camp Carson and more than 100 others were transferred to the Mountain post from other installations.

Activity at Camp Carson was greatly reduced following the end of World War II. By April 1946, the military strength at the Mountain Post had dropped to around 600. It appeared that Camp Carson would be closed. With the onset of the Korean War, however, activity once again increased. Many Reserve and National Guard units were called to active duty and stationed at Camp Carson during this time.

Camp Carson became "Fort Carson" in 1954. In the 1960s, mechanized units were assigned to the Mountain Post. At that time additional training land was purchased, bringing the post to its current size of 137,000 acres (570 km²). Fort Carson also has its own aviation facility, Butts Army Air Field, which was constructed between 1963 and 1966. The facility primarily supports helicopters and has extensive landing pad facilities, as well as a 4573 feet (1,393.9 m) runway for light fixed-wing aircraft such as the C-12. Heavier fixed-wing military aircraft supporting Fort Carson, such as USAF C-130s, will typically operate from nearby Peterson AFB. 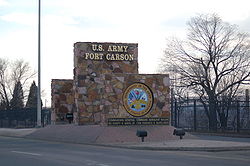 Exercises and deployments continually hone the skills of Fort Carson soldiers. When not deployed, soldiers train annually at Piñon Canyon Maneuver Site and the National Training Center near Barstow, California. Additionally, units participate in joint exercises around the world, including Central and South Africa, Europe, and Southwest Asia. In 2003, most Fort Carson units were deployed in support of Operations Enduring Freedom and Iraqi Freedom. Troops from the 984th Military Police CO, 759th Military Police BN were also sent in support of the guard mission at Guantanamo Bay Naval Base
Guantanamo Bay Naval Base
Guantanamo Bay Naval Base is located on of land and water at Guantánamo Bay, Cuba which the United States leased for use as a coaling station following the Cuban-American Treaty of 1903. The base is located on the shore of Guantánamo Bay at the southeastern end of Cuba. It is the oldest overseas...
, Cuba. President George W. Bush addressed soldiers and family members at the post on November 24, 2003, in praise of the soldiers' determination and the sacrifices their families have made.

Fort Carson's beautiful scenery has made it one of the most requested duty stations in the U.S. Army. It is considered the second most popular CONUS duty station, after Fort Lewis, Washington, and adopted "Best Hometown in the Army" as its motto in 2007.

Fort Carson has undergone a construction boom in 2007 and 2008 in preparation for the return of the 4th Infantry Division (4ID) from Fort Hood, Texas. The 4ID will set up headquarters at Fort Carson after returning from their 2008 deployment to Operation Iraqi Freedom. Arrival of the 4ID (headquarters and a heavy brigade) will bring with it approximately 5,000 additional soldiers to Fort Carson. 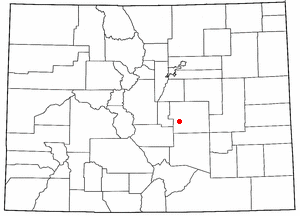 As of the census
Census
A census is the procedure of systematically acquiring and recording information about the members of a given population. It is a regularly occurring and official count of a particular population. The term is used mostly in connection with national population and housing censuses; other common...
of 2000, there were 10,566 people, 1,679 households, and 1,620 families residing in the CDP (the number increased to 13,183 by 2010
United States Census, 2010
The Twenty-third United States Census, known as Census 2010 or the 2010 Census, is the current national census of the United States. National Census Day was April 1, 2010 and is the reference date used in enumerating individuals...
).
The population density
Population density
Population density is a measurement of population per unit area or unit volume. It is frequently applied to living organisms, and particularly to humans...
was 1,126.8 people per square mile (434.9/km²). There were 2,664 housing units at an average density of 196.8 per square mile (75.9/km²). The racial makeup of the CDP was 62.8% White, 20.0% African American, 2.1% Asian, 1.7% Native American, 0.8% Pacific Islander, 7.9% from other races, and 3.8% from two or more races. Hispanic or Latino of any race were 15.4% of the population.

There were 1,679 households out of which 84.9% had children under the age of 18 living with them, 85.4% were married couples
Marriage
Marriage is a social union or legal contract between people that creates kinship. It is an institution in which interpersonal relationships, usually intimate and sexual, are acknowledged in a variety of ways, depending on the culture or subculture in which it is found...
living together, 9.7% had a female householder with no husband present, and 3.5% were non-families. 3.2% of all households were made up of individuals, none of whom were 65 years of age or older. The average household size was 3.70 and the average family size was 3.74.

The median income for a household in the CDP was $34,883, and the median income for a family was $34,385. Males had a median income of $19,865 versus $17,582 for females. The per capita income
Per capita income
Per capita income or income per person is a measure of mean income within an economic aggregate, such as a country or city. It is calculated by taking a measure of all sources of income in the aggregate and dividing it by the total population...
for the CDP was $12,772. About 7.8% of families and 9.4% of the population were below the poverty line, including 12.1% of those under the age of 18 and none of those 65 and older.

On February 14, 2007, the U.S. Army announced it was moving forward with a plan to expand the Piñon Canyon Maneuver Site
Piñon Canyon Maneuver Site
The Piñon Canyon Maneuver Site is a 235,896 acre U.S. Army base in southeastern Colorado. The Piñon County Maneuver Site is a training site for Fort Carson.-Setting:...
in southeastern Colorado. If expanded, Piñon Canyon would be the Army's largest single training area in the nation, tripling the size of the current site by adding 418000 acres (1,691.6 km²) of private ranch land. At 650,000 acres (2630 km²), it would be nearly the size of the state of Rhode Island
Rhode Island
The state of Rhode Island and Providence Plantations, more commonly referred to as Rhode Island , is a state in the New England region of the United States. It is the smallest U.S. state by area...
. Many in the local civilian population are opposed to this plan, because much of the land in rural areas that would be added to the training site is civilian-owned ranch land, and many current landowners are unwilling to be supplanted, regardless of the compensation that may be offered. The Pinon Canyon Expansion Opposition Coalition, an activist group opposing the plans, says that former maps it obtained from the Army showed a "future expansion area" significantly greater than is now being contemplated. The Army's position is that expansion is essential for preparing soldiers for battle in evergrowing theaters such as Afghanistan and the Middle East.

In response to a Congressional ban on Army funding for an expansion plan, the United States Air Force moved in with a plan to use the area for V-22 Osprey
V-22 Osprey
The Bell Boeing V-22 Osprey is an American multi-mission, military, tiltrotor aircraft with both a vertical takeoff and landing , and short takeoff and landing capability...
flights.