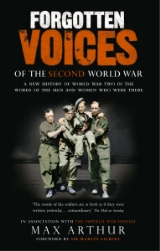 Encyclopedia
Forgotten Voices of the Second World War consists of interviews with soldiers, sailors, airmen and civilians of most nationalities who saw action during World War II
World War II
World War II, or the Second World War , was a global conflict lasting from 1939 to 1945, involving most of the world's nations—including all of the great powers—eventually forming two opposing military alliances: the Allies and the Axis...
. The interviews were drawn from the Imperial War Museum
Imperial War Museum
Imperial War Museum is a British national museum organisation with branches at five locations in England, three of which are in London. The museum was founded during the First World War in 1917 and intended as a record of the war effort and sacrifice of Britain and her Empire...
's sound archive. Many of the recordings had not been heard since the 1970s. As well as putting the interviews into chronological and campaign order, Arthur also puts the surrounding events into context.