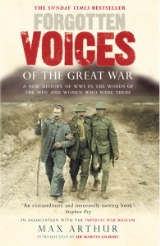 Author Max Arthur
Max Arthur
Max Arthur is an oral and military historian and author who specialises in first-hand recollections of historical events, particularly the two World Wars of the twentieth century. He has worked closely with the Imperial War Museum to bring together two books in the Forgotten Voices series,...
puts the interviews into chronological and campaign order, and provides some context about the events that surround the memories.