Encyclopedia
Ford SAF was the French
France
The French Republic , The French Republic , The French Republic , (commonly known as France , is a unitary semi-presidential republic in Western Europe with several overseas territories and islands located on other continents and in the Indian, Pacific, and Atlantic oceans. Metropolitan France...
subsidiary of the American
United States
The United States of America is a federal constitutional republic comprising fifty states and a federal district...
automaker
Automaker
The automotive industry designs, develops, manufactures, markets, and sells motor vehicles, and is one of the world's most important economic sectors by revenue....
Ford Motor Company
Ford Motor Company
Ford Motor Company is an American multinational automaker based in Dearborn, Michigan, a suburb of Detroit. The automaker was founded by Henry Ford and incorporated on June 16, 1903. In addition to the Ford and Lincoln brands, Ford also owns a small stake in Mazda in Japan and Aston Martin in the UK...
, which existed under various names between 1916 and 1954, when Ford sold the manufacturing business to Simca
Simca
Simca was a French automaker, founded in November 1934 by Fiat. It was directed from July 1935 to May 1963 by the Italian Henri Théodore Pigozzi...
.

The residuum was renamed Ford France and became an importer of models such as the English built Ford Anglia
Ford Anglia
The 1949 model, code E494A, was a makeover of the previous model with a rather more 1940s style front-end, including the sloped, twin-lobed radiator grille. Again it was a very spartan vehicle and in 1948 was Britain's lowest priced four wheel car....
and the German built Ford Taunus
Ford Taunus
The Ford Taunus is a family car sold by Ford in Germany and other countries. Models from 1970 onward were similar to the Ford Cortina in the United Kingdom...
.

The company was formed in Bordeaux as Société Française des Automobiles Ford in 1916 by Percival Perry
Percival Perry, 1st Baron Perry
Percival Lea Dewhurst Perry, 1st Baron Perry KBE , English motor vehicle manufacturer, was chairman of Ford Motor Company Limited for 20 years from its incorporation in 1928 completing almost a lifetime's work with Henry Ford...
, the head of Ford of Britain
Ford of Britain
Ford of Britain is a British wholly owned subsidiary of Ford of Europe, a subsidiary of Ford Motor Company. Its business started in 1909 and has its registered office in Brentwood, Essex...
. Like other European Ford subsidiaries, Automobiles Ford initially assembled the Ford Model T
Ford Model T
The Ford Model T is an automobile that was produced by Henry Ford's Ford Motor Company from September 1908 to May 1927...
and this continued at Bordeaux until 1925 and then at Asnières-sur-Seine
Asnières-sur-Seine
Asnières-sur-Seine is a commune in the northwestern suburbs of Paris, France, along the river Seine. It is located from the center of Paris.-Name:...
near Paris until 1927. Model As were made from 1927 to 1931 and Model Y
Ford Model Y
The Model Y is the first Ford specifically designed for markets outside the United States of America, replacing the Model A in Europe. The car was powered by a 933 cc, 8 hp Ford Sidevalve engine, and was in production in England from 1932 until September 1937, in France from 1932 to 1934...
s from 1932 to 1934. The company also imported the US-built V8-powered Ford Model B
Ford Model B (1932)
The Model B was a Ford automobile with production starting with model year 1932 and ending with 1934. It was a much updated version of the Model A and was replaced by the 1935 Ford Model 48...
, but import taxes made them very expensive and it was not very popular in France.

Ford had commissioned a new plant of its own at Poissy
Poissy
Poissy is a commune in the Yvelines department in the Île-de-France in north-central France. It is located in the western suburbs of Paris from the center.In 1561 it was the site of a fruitless Catholic-Huguenot conference, the Colloquy at Poissy...
in 1937, with the stated intention of pulling out of the Strasbourg
Strasbourg
Strasbourg is the capital and principal city of the Alsace region in eastern France and is the official seat of the European Parliament. Located close to the border with Germany, it is the capital of the Bas-Rhin département. The city and the region of Alsace are historically German-speaking,...
based Matford project. By the time Poissy came on stream, in 1940, France had been invaded and Poissy was occupied by German troops on 14 June 1940. Ford's new plant would spend its first years controlled from Ford’s Cologne location, dedicated primarily to truck and military vehicle production, initially using existing French designs and after 1943 assembling German Fords for Cologne. Meanwhile a small number of 13CV Matford V8 passenger cars, now branded as Fords, continued to be produced at least until 1942. 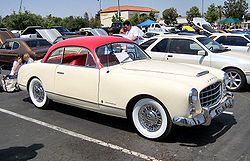 After the war the company re-introduced the smaller 2,225 cc V-8 engined Matford model, but it no longer carried the Matford name. The car was known in France as the Ford 13CV, although subsequently it is also called more formally the Ford F-472 and, after the first 300 had been produced, the Ford F-472A. The car’s handling had been criticised in the 1930s, and vehicles produced from 1946 benefitted from anti-roll bars at both ends as well as hydraulic brakes, which combined to make it easier to prevent the car from flying off the road on corners. In addition to the familiar four door sedan/saloon, chassis with front half bodies were also made available to coachbuilders and a number of coupé, cabriolet and station wagon adaptations resulted. The 13CV was valued by customers for its interior space, comfort, style and performance. Nevertheless, the tax environment in post-war France was intended heavily to discourage cars with engine sizes above 2-litres and the car’s fuel consumption also put it at a competitive disadvantage against the market leading Citroën 11CV
Citroën Traction Avant
The Citroën Traction Avant is an automobile which was produced by the French manufacturer Citroën from 1934 to 1957. About 760,000 units were produced.-Impact on the world:...
. In 1947 the company produced 3,023 of its 13CVs, which was pushed up to 4,270 in 1948. The Citroën was already being produced at more than three times that rate.

These volumes were far below those envisaged when the Poissy plant was planned, and ever since the end of the war Ford’s French boss, Maurice Dollfuss had been negotiating with US Management to be permitted to adapt a prototype developed in Dearborn in 1941. This model, launched in October at the 1948 Paris Motor Show as the Ford 12CV Vedette
Ford Vedette
The Ford Vedette is a large car manufactured by Ford France SA in their factory in Poissy from 1948-1954. Introduced at the 1948 Mondial de l'Automobile in Paris, it was designed entirely in Detroit , but featured the Poissy-made 2158 cc Aquillon sidevalve V8 engine of Ford's Flathead engine...
now replaced the F-472A. The Vedette was joined in 1952 by its upmarket counterparts, the Vendôme, and Comète
Ford Comète
The Ford Comète was a car built between 1951 and 1954 in France by the Ford Motor Company's French subsidiary, Ford SAF. Intended as the luxury model in the range, the Comète's bodywork was built by FACEL, who later produced the better-known Facel Vega luxury cars under their own name...
sports coupé, cars that were not shared with any other Ford subsidiary. In November 1954 Ford merged the entire French operation to Simca
Simca
Simca was a French automaker, founded in November 1934 by Fiat. It was directed from July 1935 to May 1963 by the Italian Henri Théodore Pigozzi...
at first keeping 15.2 per cent of the company but selling this share as well in 1958. Apart from the plant, Simca also acquired plans for a new Vedette, with the 2351 cc V8, which was made until 1961 (with a substantial modernisation for 1958) as Simca Vedette
Simca Vedette
The Simca Vedette is a large car, manufactured from 1954-1961 by the French automaker Simca, at their factory in Poissy, France. It was marketed with different model names according to trim and equipment levels...
(although still marketed in some markets as Ford for some time).

The Poissy factory had an interesting later history - after the incorporation of Ford SAF into Simca, it was also a subject of Simca's takeover by Chrysler
Chrysler
Chrysler Group LLC is a multinational automaker headquartered in Auburn Hills, Michigan, USA. Chrysler was first organized as the Chrysler Corporation in 1925....
in the 1960, and during the 1970s it manufactured the first (and, as it later turned out, only) French-made car to bear the Chrysler brand, the Chrysler 180
Chrysler 180
The Chrysler 180 was the base name for a series of large saloon cars produced by Chrysler Europe. Resulting from joining development efforts of Rootes Group and Simca, the car was produced from 1970 to 1975 in Poissy, France, and later in Chrysler's subsidiary Barreiros' factory in Spain...
. At the end of the decade, Chrysler in turn divested its European operations (including Poissy) to PSA
PSA Peugeot Citroën
PSA Peugeot Citroën is a French manufacturer of automobiles and motorcycles sold under the Peugeot and Citroën marques. Headquartered in the 16th arrondissement of Paris, PSA is the second largest automaker based in Europe and the number eight in the world.-History:In December 1974 Peugeot S.A....
, which first rebranded the Poissy production to Talbot
Talbot
Talbot was an automobile marque that existed from 1903 to 1986, with a hiatus from 1960 to 1978, under a number of different owners, latterly under Peugeot...
. Finally, in the second half of 1980s, the Talbot brand was axed and Poissy became one of the most important production sites for the Peugeot
Peugeot
Peugeot is a major French car brand, part of PSA Peugeot Citroën, the second largest carmaker based in Europe.The family business that precedes the current Peugeot company was founded in 1810, and manufactured coffee mills and bicycles. On 20 November 1858, Emile Peugeot applied for the lion...
brand and continues to be today.