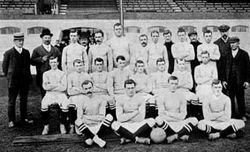 A football team is the collective name given to a group of players selected together in the various team sport
Team sport
A team sport includes any sport which involves players working together towards a shared objective. A team sport is an activity in which a group of individuals, on the same team, work together to accomplish an ultimate goal which is usually to win. This can be done in a number of ways such as...
s known as football
Football
Football may refer to one of a number of team sports which all involve, to varying degrees, kicking a ball with the foot to score a goal. The most popular of these sports worldwide is association football, more commonly known as just "football" or "soccer"...
.

Such teams could be selected to play in an against an opposing team, to represent a football club, group, state or nation, an All-star team
All-star game
An all-star game is an exhibition game played by the best players in their sports league, except in the circumstances of professional sports systems in which a democratic voting system is used...
or even selected as a hypothetical team (such as a Dream Team
Dream Team
Dream Team in sport, often only as a nickname, may refer to:* The roster of the 1992 United States men's Olympic basketball team in Barcelona* Brazil men's national volleyball team under coach Bernardo Rezende since 2002...
or Team of the Century
Team of the Century
Team of the Century and Team of the Decade are terms used in team sport to name a hypothetical best team over a given time period.For the century team, it can be either 100 years, or for a century...
) and never play an actual match.

There are several varieties of football, with the most notable being Association football, Gridiron football
Gridiron football
Gridiron football , sometimes known as North American football, is an umbrella term for related codes of football primarily played in the United States and Canada. The predominant forms of gridiron football are American football and Canadian football...
, Australian rules football
Australian rules football
Australian rules football, officially known as Australian football, also called football, Aussie rules or footy is a sport played between two teams of 22 players on either...
, Gaelic football
Gaelic football
Gaelic football , commonly referred to as "football" or "Gaelic", or "Gah" is a form of football played mainly in Ireland...
, rugby league
Rugby league
Rugby league football, usually called rugby league, is a full contact sport played by two teams of thirteen players on a rectangular grass field. One of the two codes of rugby football, it originated in England in 1895 by a split from Rugby Football Union over paying players...
and rugby union
Rugby union
Rugby union, often simply referred to as rugby, is a full contact team sport which originated in England in the early 19th century. One of the two codes of rugby football, it is based on running with the ball in hand...
. The number of players selected for each team within these varieties and their associated codes can vary substantially. In some, use of the word "team" is sometimes limited to those who play on the field in a match and does not always include other players who may take part as replacements or emergency players. "Football squad
Squad
In military terminology, a squad is a small military unit led by a non-commissioned officer that is subordinate to an infantry platoon. In countries following the British Army tradition this organization is referred to as a section...
" may be used to be inclusive of these support and reserve players.

The term football club is the most commonly used for a sports club
Sports club
A sports club or sport club, sometimes athletics club or sports association is a club for the purpose of playing one or more sports...
which is an organised or incorporated body with a president, committee and a set of rules responsible for ensuring the continued playing existence of one or more teams which are selected for regular competition play (and which may participate in several different divisions
Division (sport)
In sports, a division is a group of teams who compete against each other for a championship.-League system:In sports using a league system , a division consists a group of teams who play a sport at a similar competitive level...
or leagues). The oldest football club
Oldest football club
The history of the formation of the oldest football clubs is of interest to sport historians in tracing the origins of the modern codes of football from casual pastime to early organised competition and mainstream sport. Many early clubs did not use the word "football" in their name...
s date back to the early 19th century. The word team and club are sometimes used interchangeably by supporters, although typically refers to the team within the club playing in the highest division or competition. 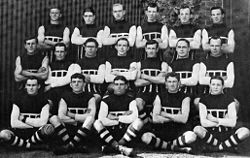 The number of players that take part in the sport simultaneously, thus forming the team are: