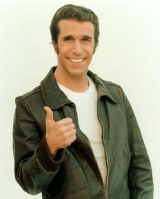 Overview
Arthur Herbert Fonzarelli (also Fonzie, The Fonz, or Fonz) is a fictional character
Fictional character
A character is the representation of a person in a narrative work of art . Derived from the ancient Greek word kharaktêr , the earliest use in English, in this sense, dates from the Restoration, although it became widely used after its appearance in Tom Jones in 1749. From this, the sense of...
played by Henry Winkler
Henry Winkler
Henry Franklin Winkler, OBE is an American actor, director, producer, and author.Winkler is best known for his role as Fonzie on the 1970s American sitcom Happy Days...
in the American
United States
The United States of America is a federal constitutional republic comprising fifty states and a federal district...
sitcom Happy Days
Happy Days
Happy Days is an American television sitcom that originally aired from January 15, 1974, to September 24, 1984, on ABC. Created by Garry Marshall, the series presents an idealized vision of life in mid-1950s to mid-1960s America....
(1974–1984). He was originally a secondary character, but eventually became the lead. By the mid 1970s, he dwarfed the other characters in popularity.

In 1999 TV Guide
TV Guide
TV Guide is a weekly American magazine with listings of TV shows.In addition to TV listings, the publication features television-related news, celebrity interviews, gossip and film reviews and crossword puzzles...
ranked him number 4 on its 50 Greatest TV Characters of All Time list.
Born in the fictional town of East Meadow as a child, he and his mother were abandoned by his father.

What kind of boots did Fonzie wear? Did he ever wear black boots that had a metal desgn across the front of the boot strap near the ankle area?
More

WHAT WAS THE NAME OF THE GARAGE HE WORKED AT?
More
x