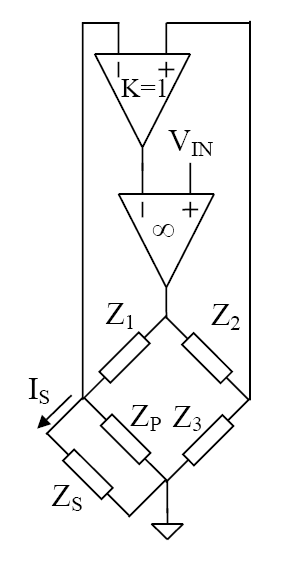 A Fontana bridge is a type of bridge circuit
Bridge circuit
A bridge circuit is a type of electrical circuit in which two circuit branches are "bridged" by a third branch connected between the first two branches at some intermediate point along them. The bridge was originally developed for laboratory measurement purposes and one of the intermediate...
that implements a wide frequency band voltage-to-current converter. The converter is characterized by a combination of positive and negative feedback loops, implicit in this bridge configuration. This feature allows compensation for parasitic impedance

connected in parallel with the useful load

, which in turn keeps an excitation current

flowing through the useful load

independent of the instantaneous value of

. This feature is of great advantage for making electromechanical transducers.
If balance condition: