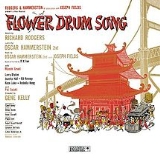 Overview
Flower Drum Song was the eighth stage musical
Musical theatre
Musical theatre is a form of theatre combining songs, spoken dialogue, acting, and dance. The emotional content of the piece – humor, pathos, love, anger – as well as the story itself, is communicated through the words, music, movement and technical aspects of the entertainment as an...
by the team of Richard Rodgers
Richard Rodgers
Richard Charles Rodgers was an American composer of music for more than 900 songs and for 43 Broadway musicals. He also composed music for films and television. He is best known for his songwriting partnerships with the lyricists Lorenz Hart and Oscar Hammerstein II...
and Oscar Hammerstein II
Oscar Hammerstein II
Oscar Greeley Clendenning Hammerstein II was an American librettist, theatrical producer, and theatre director of musicals for almost forty years. Hammerstein won eight Tony Awards and was twice awarded an Academy Award for "Best Original Song". Many of his songs are standard repertoire for...
. It was based on the 1957 novel, The Flower Drum Song
The Flower Drum Song
The Flower Drum Song is a novel by Chinese-American author C. Y. Lee, first published in 1957. The novel tells the story of Chinese immigrants in San Francisco, and was a bestseller in its time. It is the basis of 1958 musical Flower Drum Song....
, by Chinese-American author C. Y. Lee
C. Y. Lee (author)
Chin Yang Lee is a Chinese American author best known for his 1957 novel The Flower Drum Song, which inspired the Rodgers and Hammerstein musical Flower Drum Song and writer for his 2006 film "10,000 Apologies" with May Wang.-Biography:...
. The piece opened in 1958 on Broadway
Broadway theatre
Broadway theatre, commonly called simply Broadway, refers to theatrical performances presented in one of the 40 professional theatres with 500 or more seats located in the Theatre District centered along Broadway, and in Lincoln Center, in Manhattan in New York City...
and was afterwards presented in the West End
West End theatre
West End theatre is a popular term for mainstream professional theatre staged in the large theatres of London's 'Theatreland', the West End. Along with New York's Broadway theatre, West End theatre is usually considered to represent the highest level of commercial theatre in the English speaking...
and on tour. It was subsequently made into a 1961 musical film
Flower Drum Song (film)
Flower Drum Song is a 1961 film adaptation of the 1958 Broadway musical Flower Drum Song, written by the composer Richard Rodgers and the lyricist/librettist Oscar Hammerstein II. The film and stage play were based on the 1957 novel of the same name by the Chinese American author C. Y...
.

What was the best scene or sond from the flower drum song musical?
More
x