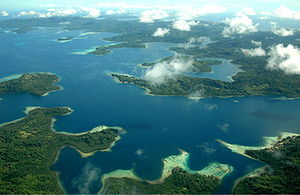 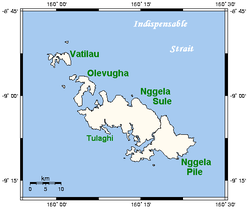 The Nggela Islands, also known as the Florida Islands, are a small island group in the Central Province
Central Province (Solomon Islands)
The Central Province is one of the provinces of the Solomon Islands, covering the Russell Islands, Nggela Islands and Savo Island. Its area comprises 615 km² and had a population of 21,577 as of 1999. The capital is Tulagi.-Islands:*Aeaun...
of the Solomon Islands
Solomon Islands
Solomon Islands is a sovereign state in Oceania, east of Papua New Guinea, consisting of nearly one thousand islands. It covers a land mass of . The capital, Honiara, is located on the island of Guadalcanal...
, a state
Sovereign state
A sovereign state, or simply, state, is a state with a defined territory on which it exercises internal and external sovereignty, a permanent population, a government, and the capacity to enter into relations with other sovereign states. It is also normally understood to be a state which is neither...
in the southwest Pacific Ocean
Pacific Ocean
The Pacific Ocean is the largest of the Earth's oceanic divisions. It extends from the Arctic in the north to the Southern Ocean in the south, bounded by Asia and Australia in the west, and the Americas in the east.At 165.2 million square kilometres in area, this largest division of the World...
.

The Nggela Islands group lies immediately north of the more famous island of Guadalcanal
Guadalcanal
Guadalcanal is a tropical island in the South-Western Pacific. The largest island in the Solomons, it was discovered by the Spanish expedition of Alvaro de Mendaña in 1568...
, the scene of the Battle of Guadalcanal
Guadalcanal campaign
The Guadalcanal Campaign, also known as the Battle of Guadalcanal and codenamed Operation Watchtower by Allied forces, was a military campaign fought between August 7, 1942 and February 9, 1943 on and around the island of Guadalcanal in the Pacific theatre of World War II...
during World War II
World War II
World War II, or the Second World War , was a global conflict lasting from 1939 to 1945, involving most of the world's nations—including all of the great powers—eventually forming two opposing military alliances: the Allies and the Axis...
; however, Nggela Sule itself was garrisoned by the Japanese
Empire of Japan
The Empire of Japan is the name of the state of Japan that existed from the Meiji Restoration on 3 January 1868 to the enactment of the post-World War II Constitution of...
in April 1942 in connection with their efforts to establish a seaplane
Seaplane
A seaplane is a fixed-wing aircraft capable of taking off and landing on water. Seaplanes that can also take off and land on airfields are a subclass called amphibian aircraft...
base on neighboring Gavutu. On 7 August of the same year, the United States
United States
The United States of America is a federal constitutional republic comprising fifty states and a federal district...
1st Battalion
1st Battalion 2nd Marines
1st Battalion, 2nd Marines is an infantry battalion in the United States Marine Corps based out of Marine Corps Base Camp Lejeune, North Carolina consisting of approximately 900 Marines and Sailors...
, 2nd Marine Regiment landed on the island to provide cover for the assault on the neighboring Tulagi islet. Florida Island would never become as famous as Guadalcanal, although it did serve as a small, very secondary base of operations for the US & Australian war effort in the Pacific for the duration of the war. Following the American liberation of the island from the Japanese, it became the site of a US seaplane base. The island subsequently served as a watering point for the US Navy
United States Navy
The United States Navy is the naval warfare service branch of the United States Armed Forces and one of the seven uniformed services of the United States. The U.S. Navy is the largest in the world; its battle fleet tonnage is greater than that of the next 13 largest navies combined. The U.S...
, diverting water from an underground source on the island.