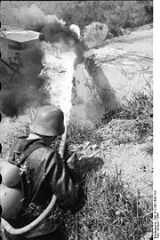 Encyclopedia
The Flammenwerfer 35, or FmW 35 (literally, "flame thrower") was the one-man German flamethrower
Flamethrower
A flamethrower is a mechanical device designed to project a long controllable stream of fire.Some flamethrowers project a stream of ignited flammable liquid; some project a long gas flame. Most military flamethrowers use liquids, but commercial flamethrowers tend to use high-pressure propane and...
used during World War II
World War II
World War II, or the Second World War , was a global conflict lasting from 1939 to 1945, involving most of the world's nations—including all of the great powers—eventually forming two opposing military alliances: the Allies and the Axis...
used to clear out trenches and buildings. This was a deadly weapon that was extremely effective at close range. It could project fuel up to 25m from the user.

It had a weight of 35.8 kilograms (78.9 lb), and held 11.8 litres (24.9 US pt) of flaming oil, (Flammöl 19), petrol mixed with tar to make it heavier and to give it better range, which was ignited by a hydrogen torch providing about 10 seconds of continuous use. The firing device is activated at the same time with the Selbstschlussventil and is to be found inside the protective pipe. The Flammenwerfer 35 was produced until 1941, when the lighter, slightly redesigned Flammenwerfer 41 (FmW 41) began replacing it.
During the later stages of its service life, the trigger and muzzle section of the Flammenwerfer were dressed up to look like a standard infantry rifle in an attempt to disguise operators and keep them from being singled out by enemy snipers.