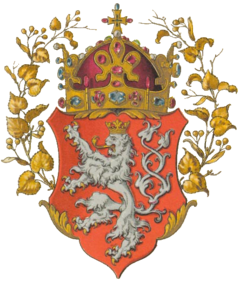 The Bohemian flag was used as the flag of the Czechoslovak Republic (ČSFR) as part of the Czech and Slovak Federative Republic (1990 - 1992). Flag was adopted in reaction to adoption of separate Slovak symbols. In the Czech part of the dualist republic the flag saw much less use than the wider flag of Czechoslovakia. Whereas the flag of Slovakia
Flag of Slovakia
The current form of the flag of Slovakia was adopted by Slovakia's Constitution, which came into force on 3 September 1992. The flag, in common with other Slavic nations, uses the white, blue and red colours....
(then without coat of arms and thus identical to flag of the WWII Slovak Republic) was widely used in Slovak part. This difference mirrored prevailing separatist tendencies in the Slovak Republic and federalist tendencies in the Czech Republic.

The flag currently has no legal status and is practically never seen today in the Czech Republic.