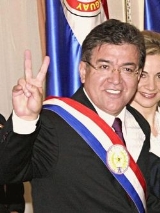 According to Paraguayan law, the Office of the First Lady of the Nation depends structurally and financially on the Presidency of the Republic. The First Lady exercises her duties through the REPADEH (Red Paraguaya para el Desarrollo Humano) Foundation, focused mainly in social and health affairs.